How close is the next recession?

At the end of 2021, a new chapter started for monetary policy. Against a backdrop of record high inflation rates in the U. S. and the euro area, the U. S. Fed and the European Central Bank admitted at the end of 2021 that the high inflation was not just temporary after all and announced a turnaround in their monetary policy stances. The U.S. Fed took the first steps to raise interest rates as early as the beginning of 2022 with the aim of generating a "soft landing" for the economy, i.e., to slow inflation without dragging the economy into recession. But inflation continued to rise, and the invasion of Ukraine by Russian troops and the subsequent sanctions against Russia fueled inflation yet more. While in the U.S. the real economy remains resilient and investors fear a slowdown due to tighter monetary policy, the eurozone is suffering from its energy dependence on Russia. This could entrench "stagflation" for a longer period of time. In China, the persistence of the zero-covid strategy caused a slump in production with global repercussions.

By mid-June, the U.S. private economy had continued to grow despite the geopolitical uncertainty caused by the war in Ukraine and the bottlenecks in international trade. Purchasing managers' indices, which are based on monthly economic surveys, are at expansionary levels (fig. 1). However, survey participants reported slowing growth due to rising prices, falling demand, supply chain bottlenecks and labor shortages.1 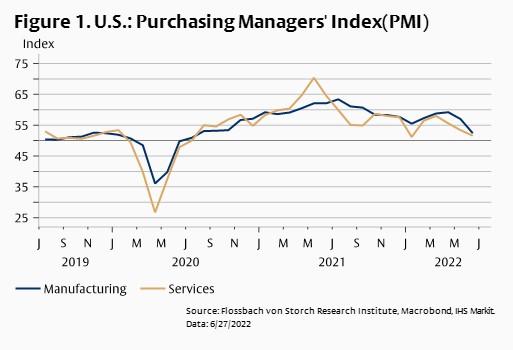 Private consumption has reached pre-pandemic levels, but the outlook is gloomy. The index for personal consumption expenditures adjusted for the development of prices (quantity index, PCE) reached the level of January 2020 in the first half of 2021 (fig. 2). By the end of April 2022, no collapse in spending on either goods or services had been observed. The volume of credit card loans to households also recovered to pre-pandemic levels and continued to increase through the end of June, albeit at a somewhat slower pace (fig. 2).  Including the second week of June, Internet search intensity for terms such as "restaurant" or "hotel" on Google was above the pre-pandemic average level (fig. 3). 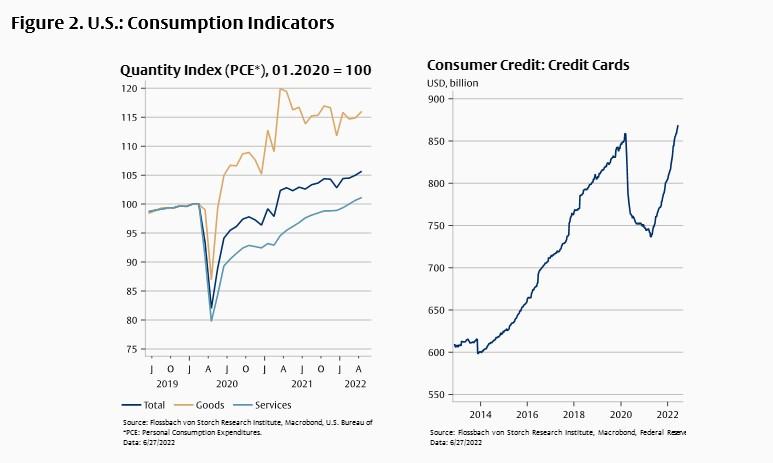 The consumer climate, however, is bleaker than it has been since 2011. The University of Michigan's Consumer Sentiment Index, which is based on surveys of people's perceptions of the state of the economy and the outlook for one to five years, is currently at its lowest historical level. Since 1960, a similar decline in the consumer sentiment index has typically been followed by a recession. 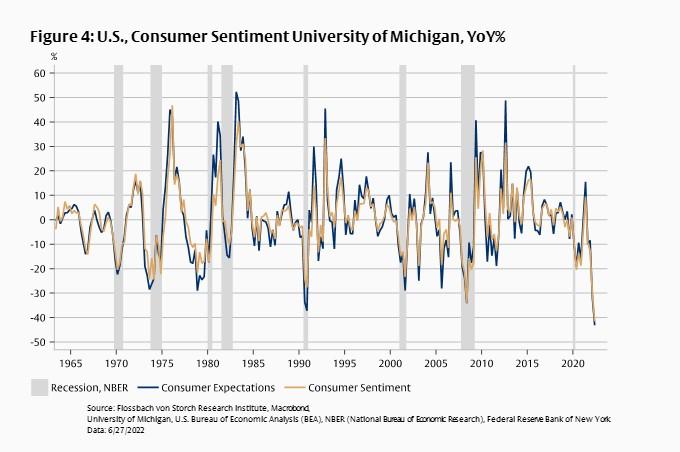 Labor market trends, however, do not point to a weakened economy. Nonfarm private sector employment reached pre-pandemic levels in May and initial jobless claims are below the 1990-2019 average at historically low levels (fig. 4). This, along with strong wage growth, is challenging monetary policy. 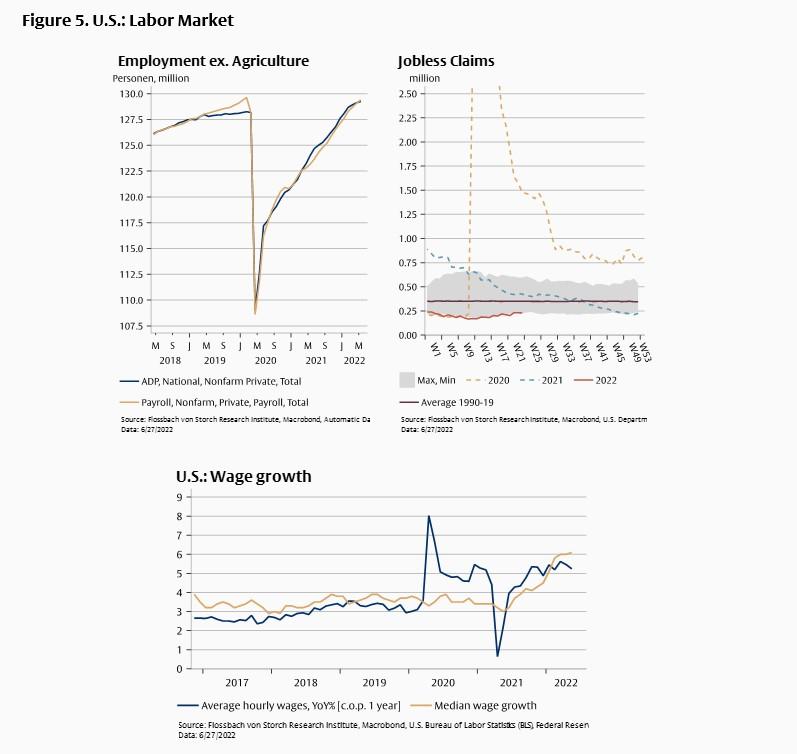 In this macroeconomic context, the Fed's monetary policy decisions are driven by strong consumption and a tight labor market and restrained by fears of a recession. The interest rate hikes so far have not yet been able to influence inflation. It rose to 8.6% in May. The ratio of job openings to the unemployment rate (Beveridge curve) shows that further tightening of monetary policy is needed. Since April 2020, the Beveridge curve has moved outward (Fig. 5). This means that if the unemployment rate is just under 4%, as is currently the case, instead of a vacancy rate of 4%, as was the case before the pandemic, we can expect a rate of 7%. The Fed is likely to try to return from the upper (yellow) to the lower Beveridge curve by raising interest rates. Monetary policy would have to be tightened precisely enough to reduce the vacancy rate without increasing the unemployment rate. Whether this maneuver will succeed in avoiding a recession is highly questionable, given the rather loose transmission of monetary policy to the economy. 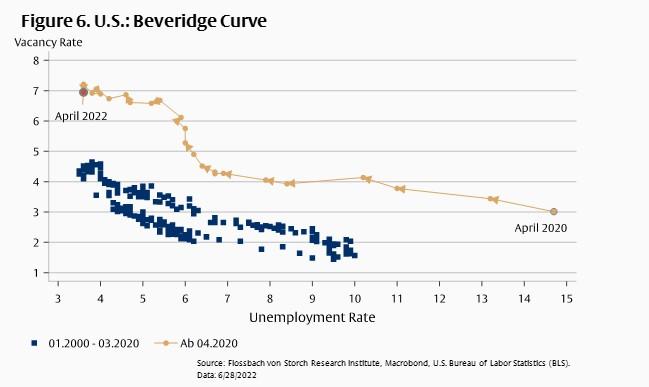 Since the invasion of Ukraine by Russian troops and the subsequent Western sanctions against Russia, there has been a shortage of supply of several raw materials, so that their prices have soared. This is hitting European countries the hardest because much of their imports of these commodities come from Russia. Total producer price inflation reached 37% in the eurozone in April; excluding energy prices, it was 16%. Along with supply difficulties and uncertainty about the outcome of the war, this resulted in a decline in orders that weakened purchasing managers' indices in May and June (Fig. 7).2  Low electricity consumption in the last two months in Germany, France and Spain, indicates lower production (fig. 8). 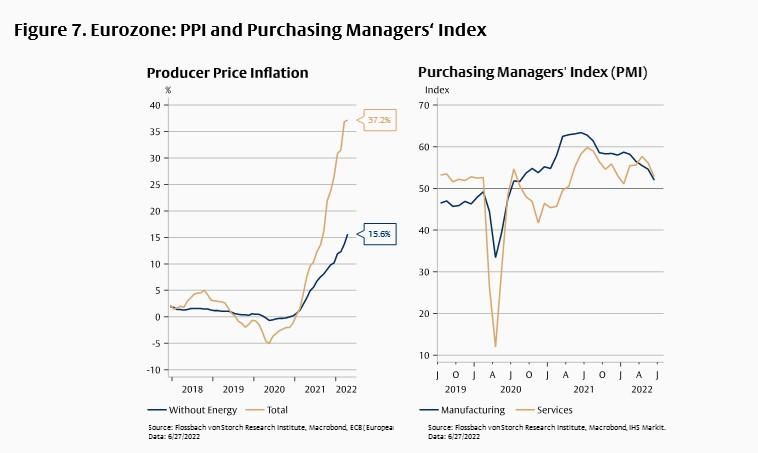 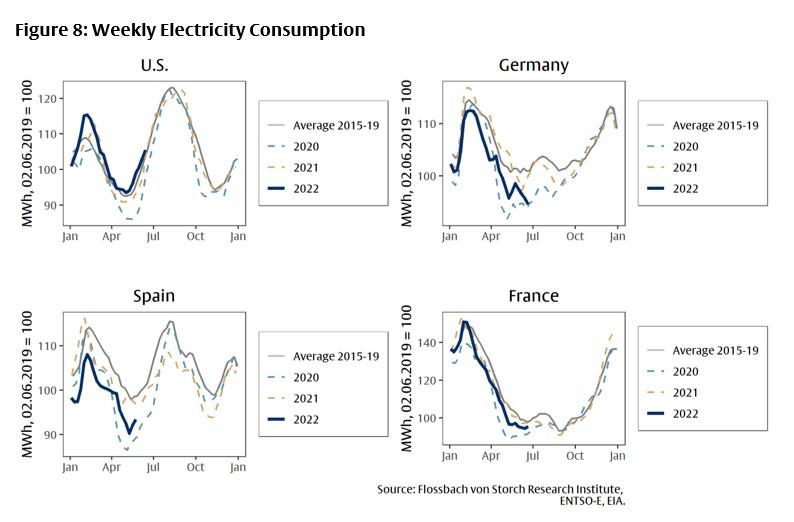 Consumption is stronger than last summer thanks to the easing of Corona measures. In April, passenger traffic at Frankfurt Airport was higher than in 2020 and 2021, and it continued to rise toward pre-pandemic levels (Fig. 9). Internet search intensity for terms in the "travel" category is at 2021 levels, and "restaurants" are "googled" more frequently than before the pandemic (fig. 10). 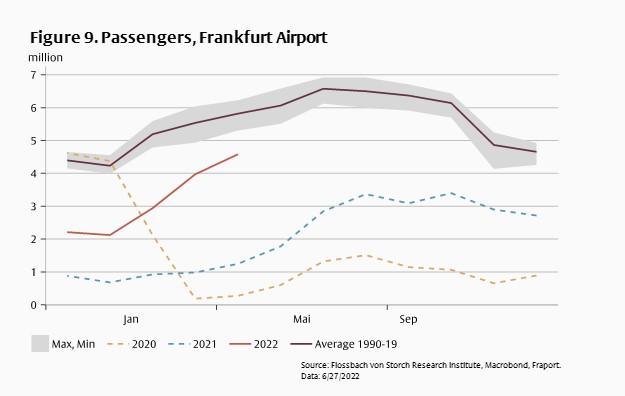 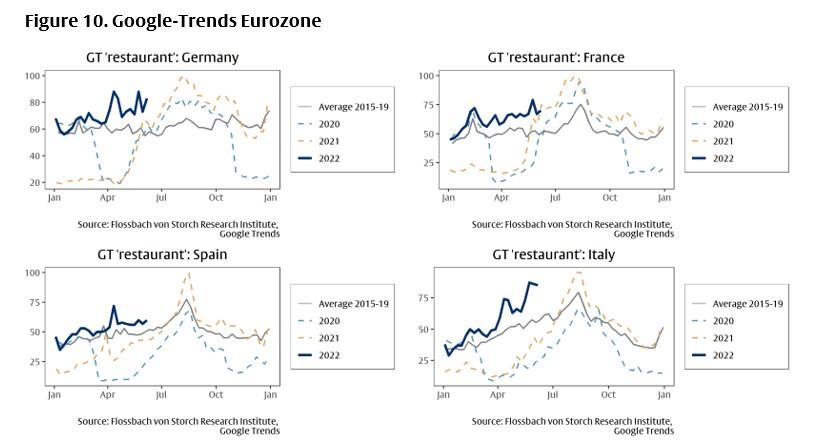 The consumer and business climate show concerns about future developments, similar to the situation in the US. The ifo business climate index for Germany is well below the average for the years before the pandemic, and the European Commission's consumer confidence survey shows that significantly more people in the euro zone assess the economic situation today worse than a year ago (Fig. 11). 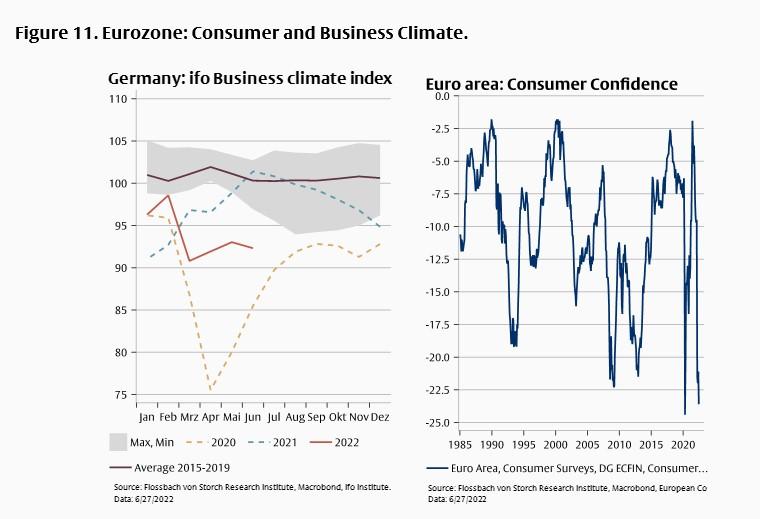 The monetary policy response to the high inflation rates was weaker in the euro zone than in the US. The ECB justifies this by pointing out that the U.S. economy suffers far more from overheating demand than the eurozone economy. In fact, the euro zone is more affected by supply constraints than the US. However, this does not relieve the ECB of its duty to curb inflation-driving excess demand, regardless of whether it has come about as a result of expansionary fiscal policy (as in the U.S.) or supply constraints (as in the euro area).

The ECB's larger hesitation increases the risk of a price-wage-price spiral. In the euro area, too, the Beveridge curve shows tensions in the labor market, from which the unions can draw bargaining power in the upcoming wage negotiations (Fig. 12). Therefore, the ECB's hesitancy cannot be justified on purely economic grounds. Instead, the decisive factor is probably that the ECB is under stronger fiscal dominance than the Fed.3  In particular, it has to ensure that the highly indebted Italian government can continue to borrow again at low interest rates. Because a recession to fight inflation in the eurozone could quickly turn into a sovereign debt crisis with a resulting banking crisis, the ECB chooses the path of financial repression and stagflation. This may reduce the debt ratios of vulnerable euro states without a larger fiscal policy effort, but it erodes the internal and external purchasing power of the euro. The euro has followed in the footsteps of the Italian lira. 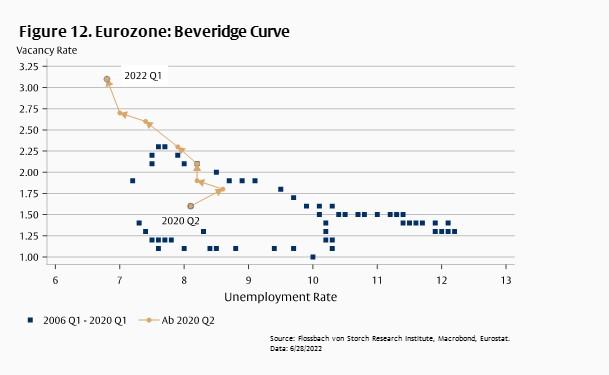 To stop the spread of the highly contagious Omikron variant of the coronavirus as part of the zero-covid strategy, the Chinese government again introduced lockdowns. The purchasing managers' index fell sharply in April in both the service and manufacturing sectors (Fig. 13). There was a slight recovery in May, but the index remained in contractionary territory. With falling infection rates, the strictest lockdowns have been lifted and a return of mobility on the roads is evident in the larger cities (Fig 14.). Production is also expected to rise again thanks to further stimuli, which should help increase supply in the euro zone and the USA. 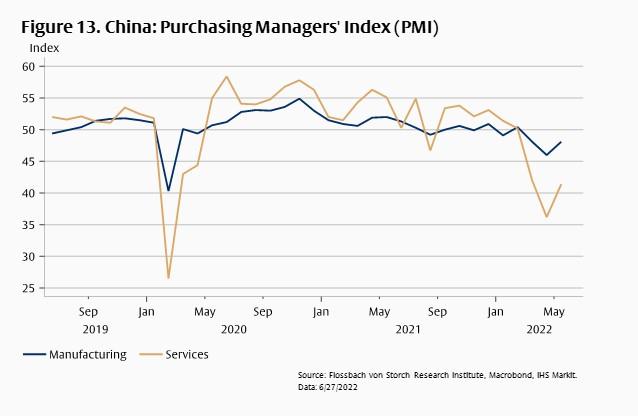 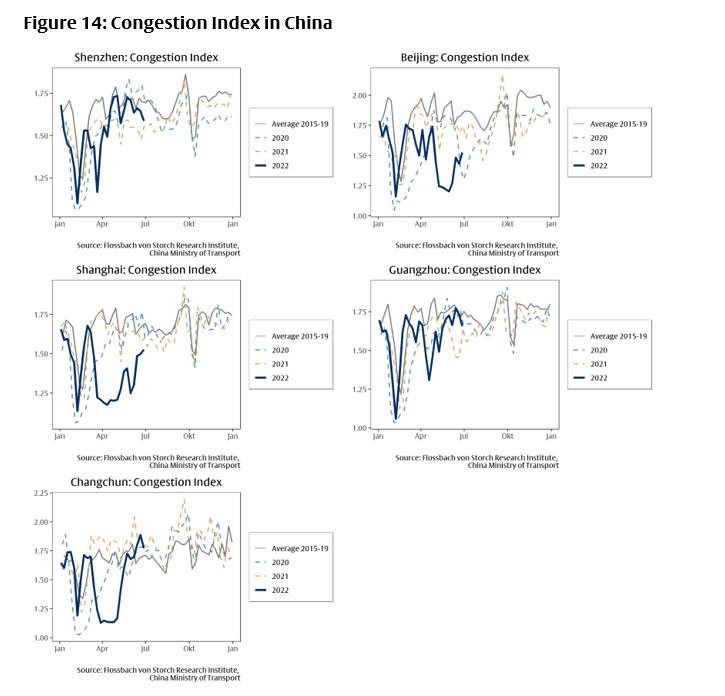 Viral infections spread in cycles.4 Therefore, the Chinese zero-covid policy is likely to lead to recurrent lockdowns. In South Africa, where the first omicron infections were detected, another wave of infections driven by omicron subvariants occurred in May (Fig. 14). Because the population has achieved a high level of immunity through surviving infections or vaccination, however, there has not been a sharp increase in deaths. In contrast, the level of immunity in China is low. A renewed flare-up of the infection wave will prompt again the government to impose lockdowns, which will severely disrupt economic activity. China has not only moved from being a partner to an adversary in geopolitical terms, but its covid policy also poses a significant risk to the global economy.5 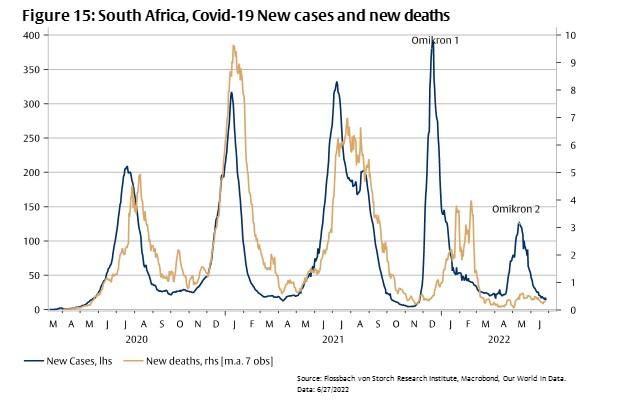 Stagflation and deglobalization are weighing on the global economy. The U.S. is likely to be least affected, the euro area most. China's economy depends on its covid policy, the financial risks in the real estate sector, and its positioning in the Uk ...