Inflation’s footprint on our society

Since prices in supermarkets have risen, there has been intense discussion about inflation and its social consequences at the dinner table at home and in the social media. Not so long ago, it was a special topic that only economists were interested in.

When people discuss inflation, they usually refer to consumer prices. These have risen by an average of two percent a year since 2014. If you ignore the rise over the last 12 months, the price increase was actually only around one percent - too low to leave a footprint on society.

But consumer prices do not fully describe inflation. In fact, there has already been tremendous inflation over the last eight years. It was so strong, that it changed our society significantly. However, one did not notice this at the supermarket checkout. It occurred on capital markets and on real estate markets and is referred to as asset price inflation.

Asset price inflation describes the price increase of real assets (e.g. real estate or business wealth) and financial assets (e.g. saving deposits or fund shares). The price of such assets is not included in the calculation of the consumer price index.

While all population groups generally suffer from rising consumer prices, this is different in the case of rising asset prices: Those who own assets benefit from them. However, asset price inflation also describes how much more expensive it has become to build up wealth. So if asset prices rise, it becomes all the more difficult for anyone who does not own any assets worth mentioning to build up wealth and thus a standard of living and retirement provision.

This becomes clear in an exemplary comparison of two households typical of the German middle class2. For this purpose, we consider two households that have the same net wealth, but with one important exception. The first household owns a real estate property, the second one does not. As equity, the first household has contributed 85% of its financial assets for this purpose. The debt of the real estate owner is equal to the value of the real estate minus the equity contributed. 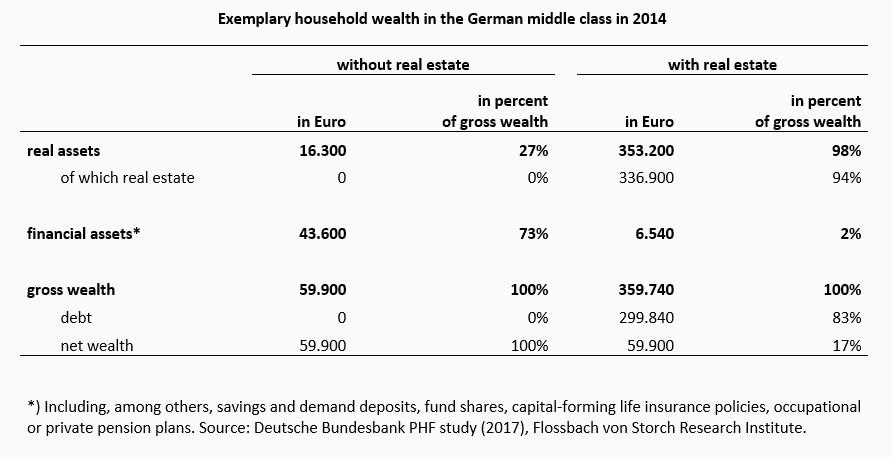 The bottom graph shows how asset prices have evolved for the two households. Excluding real estate, there has been no significant asset price inflation for the typical middle-class household. Just under one percent annually, the prices of what they own have risen. Cumulatively, this corresponds to a price increase of only seven percent over the eight-year period. 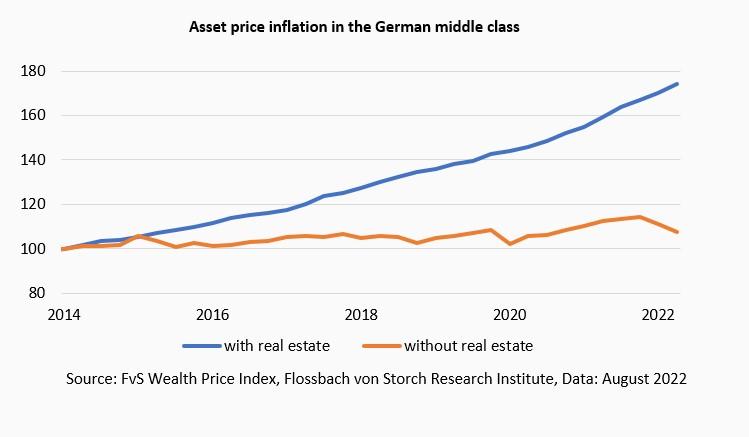 With real estate ownership, this looks entirely different. Within the relatively short period of eight years, real estate owners in the German middle class can enjoy a 74% increase in the price of their assets. The reason for this is that their real estate has risen in price by 79%.

The difference in asset price inflation between the two households corresponds to the increased cost of wealth accumulation, which has arisen in addition to the other benefits of real estate ownership. Accordingly, wealth accumulation has become 67% more expensive in eight years, making it seriously more difficult3. Only the very few will be lucky enough to have a salary increase to compensate for this.

Even though asset price inflation has eased significantly in the past two quarters and the development of some asset prices may be volatile, structural changes in the cross-section of German households will persist for a long time to come.

Asset price inflation in Germany is closely related to economic growth and to the monetary policy of the European Central Bank (ECB). The ultra-loose monetary policy of recent years has caused asset prices to rise massively. Since wealth is not equally distributed among the German population, inflation has exacerbated structural wealth inequalities in the cross-section of wealth, age, occupational groups, etc. The next rung on the wealth ladder has now become out of reach for many households.

Given these findings, it is surprising that the inflation issue has only recently gained public traction. It would have deserved a central place in the public discussion already in the past eight years.

2 The household wealth composition is derived from the PHF study of the Deutsche Bundesbank (2017).

The trend reversal on the markets for real and financial assets continued in the second quarter of 2022. Compared with the prior-year quarter, the price of private German household wealth rose by only three percent. Just a year ago, asset price infla ...

Ways out of the inflation crisis

A year and a half ago we discussed the return of inflation. Now it is here. Today we talk about how it could continue and what could be done about it in the monetary union. If our video has made you curious about more on this topic, we recommend the ...

All articles by Philipp Immenkötter