Governments reacted with massive expansionary fiscal and monetary policies to cushion the economic damage inflicted by the lockdown measures to contain the spread of the coronavirus in 2020. While central banks had been the first line of response to economic crises in big, industrialized countries since 2008, their range of maneuver in 2020 was more limited. With policy interest rates at or below zero and therefore little scope to stimulate bank lending further, central bankers called on fiscal policy to take the lead in providing a Keynesian countercyclical stimulus. Fiscal authorities announced generous debt-financed stimulus packages while central banks actively bought government debt securities in secondary markets to lower government bond yields at the same time. In the following, we review how much central banks contributed to the financing of governments’ budget deficits in 2020. 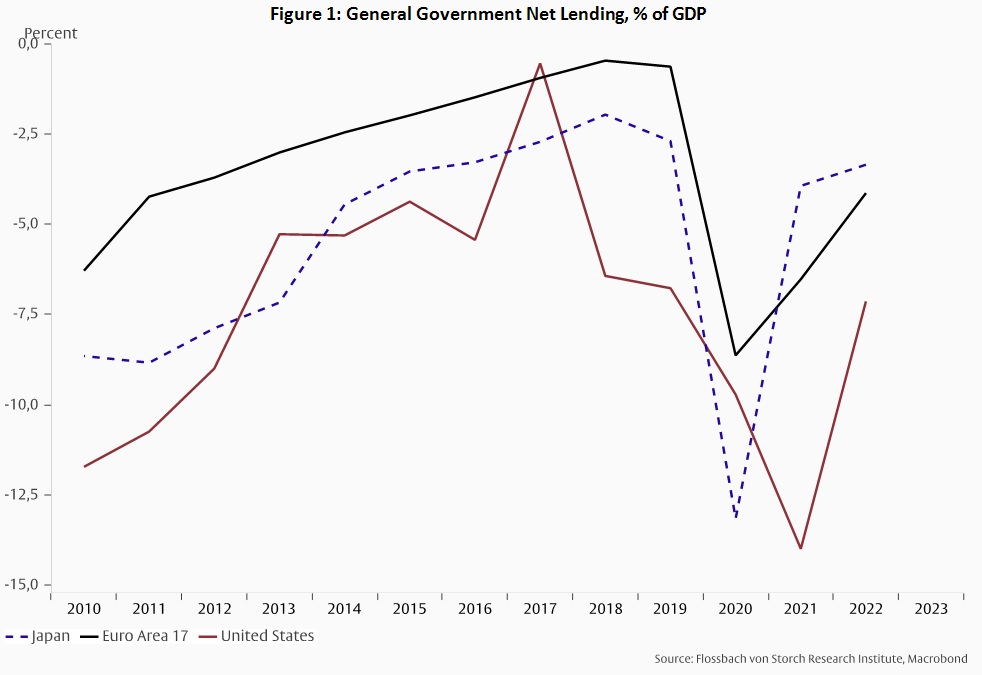 Monetary policy interventions by central banks have had an important impact on governments’ ability to finance the stimulus packages. As part of their monetary policy toolkit, central banks started purchasing financial assets as a way of increasing liquidity (dubbed quantitative easing or QE) when they had no room to further lower policy rates. Japan was in this situation already in the early 2000s, the US and the Eurozone came into it in the aftermath of the financial crisis of 2007/08. Central banks have purchased government and corporate bonds as well as other assets and lowered market rates despite rising new debt issuance by the public and private sector. As a consequence, their balance sheet size has increased substantially.

Although the fiscal deficit increased in the euro area by less than in the other countries considered here in 2020, the European Central Bank contributed most to its funding. While the US Federal Reserve and the Bank of Japan bought the equivalent of 55% and 53%, respectively, of the net new bond emissions of their respective governments, the Eurosystem of Central Banks (the ECB plus the national central banks, the so-called ESCB) purchased through the Public Securities and Pandemic Emergency Purchase Programmes (PSPP and PEPP) government bonds equivalent to 95.5% of the 991 Billion Euro newly issued eurozone government debt (Figure 2). 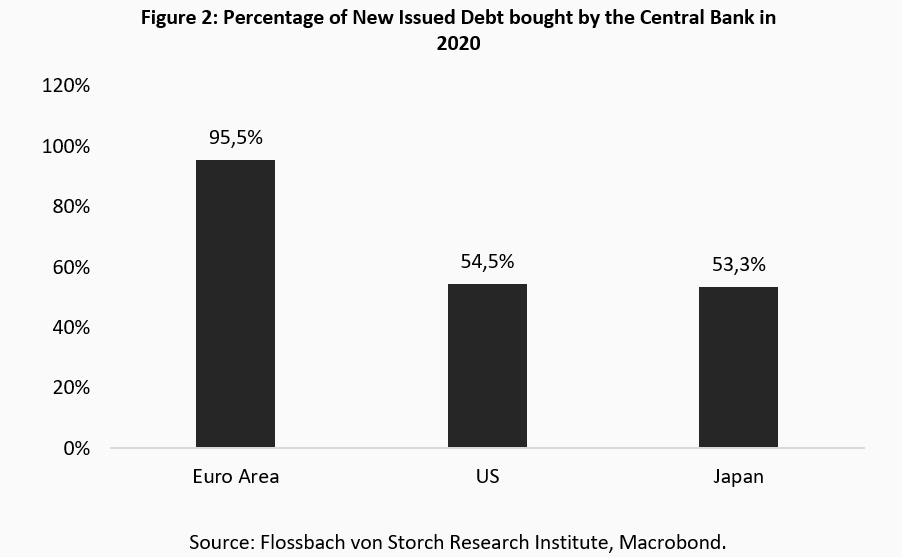 The distribution of bond purchases under the PSPP, created in 2015, was meant to follow the Eurosystem’s capital key, which is determined by the contributions of each country’s population and GDP to the respective euro area totals. The central banks of Germany (26.4%) and France (20.4%), for example, have the largest share in the ECB’s capital and should therefore have the largest allocation in the PSPP. The temporary PEPP, created in 2020 to deal with the coronavirus pandemic, was given the flexibility to deviate from the capital key to allow more purchases from member countries facing the strongest financial distress. The ESCB seems to have used this flexibility, buying the equivalent of 117.1% of the Italian and 113.4% of the Spanish newly issued government bonds in 2020. Against this, the ESCB financed 82.8% of German and 65.9% of French new government bond issues in 2020 (Figure 3). Presumably, the relatively high allocation to Germany was motivated by the desire to deviate not too much from the capital key while the allocations to other countries may have been motivated by the intent to contain the spreads of their bond yields relative to Germany (Figure 4). 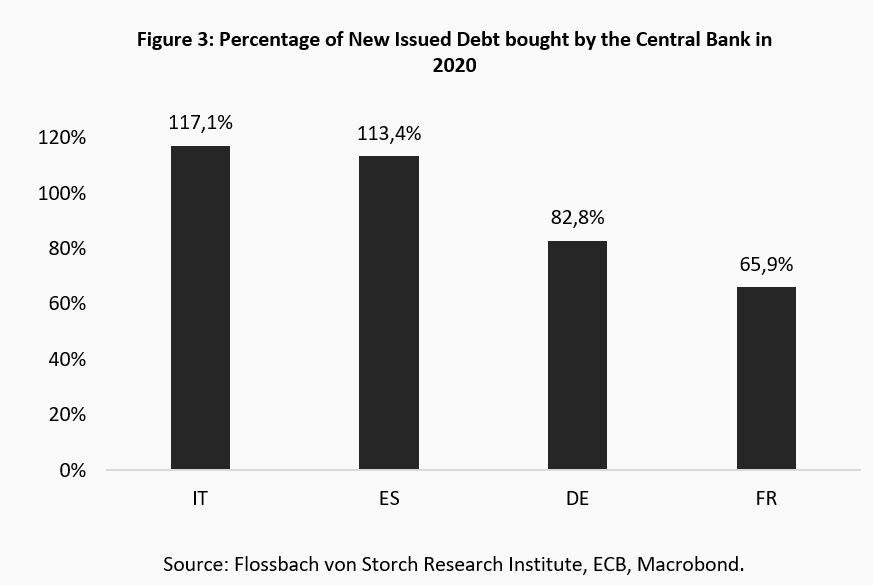 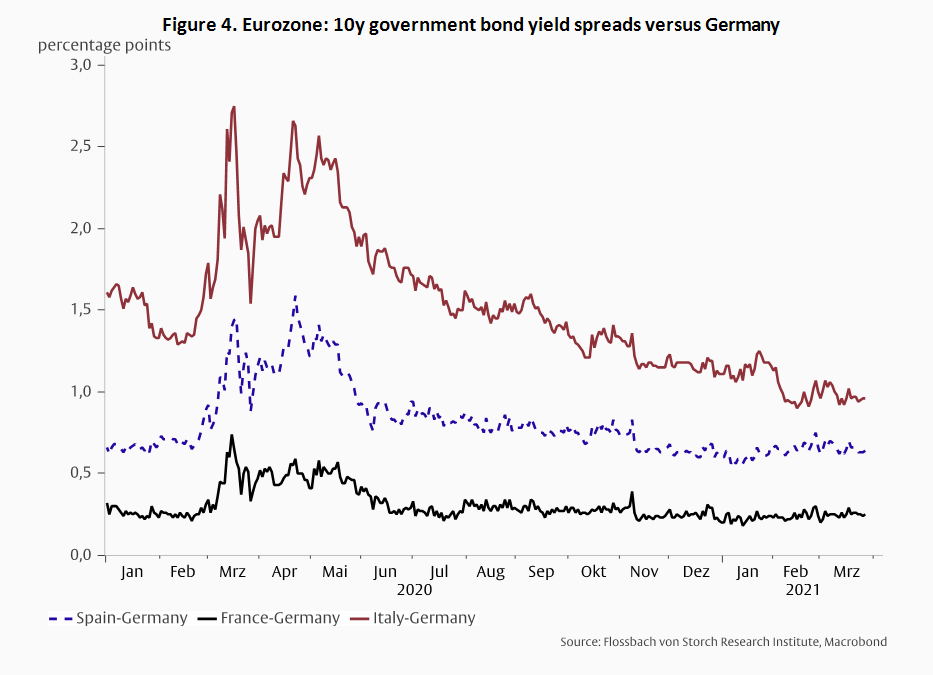 Central banks have maneuvered themselves in a difficult position. By actively intervening in sovereign bond markets, they are facilitating the issuance of larger amounts of government debt and hence expose themselves to political pressure to give priority to the monetary financing of government borrowing over price stability. As financial market participants realize this, inflation expectations and market interest rates increase. This confronts central banks with the dilemma of moving to a policy of “yield curve control” as already practiced by the Bank of Japan, or of having to fight renewed financial and economic instability when market rates continue to increase.

For now, the Fed appears to accept the steepening of the US Treasury Bond yield curve while the ECB has signaled indirect yield curve and spread control by verbal intervention and stepping up the pace of government bond buying. However, should markets push bond yields sharply higher, both the Fed and ECB may have to follow more explicitly the example of the BoJ and limit the steepening of the curve more aggressively. To avoid this, they can only hope that their in-house forecasts of continuously low inflation materialize.

Inflation narratives will determine the fate of the central banks