The US labor market in the Corona crisis

Thanks to the expanded unemployment assistance, around 40% of workers are presumed to make more money when unemployed than in their prior jobs. As this is likely to disincentivize the unemployed to search for a new job, higher structural unemployment with wages sticky above market clearing levels could be the result. 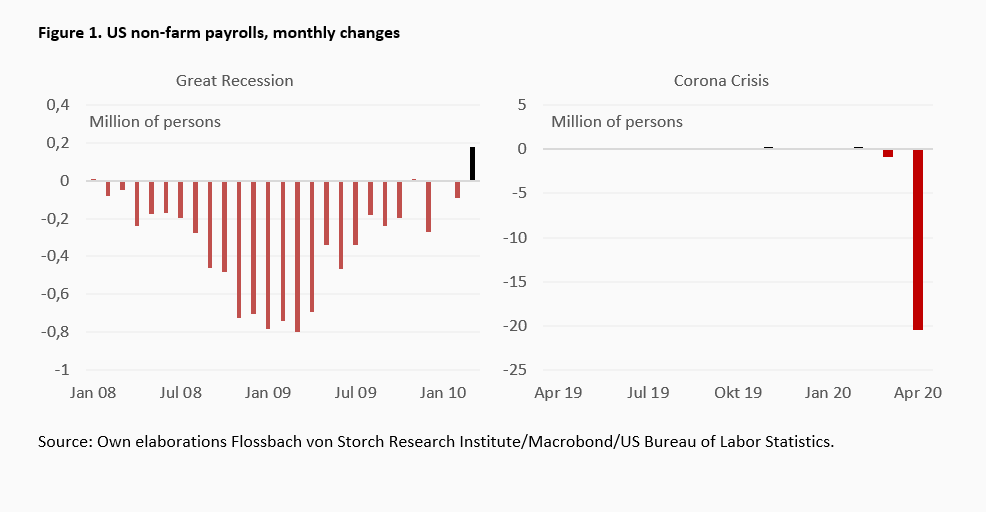 Much different this time is also the sectoral composition of the consequences. Whereas during the Great Recession employment losses were balanced between manufacturing and service industries, almost 84% of jobs currently lost stemmed from services. Herein the most hit sectors are transportation & warehousing, professional & business services, wholesale & retail trade, leisure and hospitality, and education and health (Figure 2). As a result, the overall unemployment rate increased from 3.5% in February to 14.7% in April.

However, the major risk stemming from the US labor market shock is not so much the rising unemployment itself, but rather the possibility that the labor market developments during the crisis have permanent consequences in the form of rising structural unemployment.

The labor market dynamics can be explained in a standard-textbook demand-supply framework.1 Labor demand originates from firms and depends directly on labor costs (mainly wages adjusted for productivity), in addition to other factors, like market power in setting prices, business cycle situation or public interventions. Regarding the latter, the current lockdown measures due to the corona crisis lead to a reduction of labor demand by companies.2 Labor supply stems from workers and is typically determined by the wage level, in addition to other factors, like family situation and relevant institutional settings, among which unemployment assistance. Given that the latter provides an alternative, non-labor source of income, an increase in unemployment assistance diminishes labor supply.3 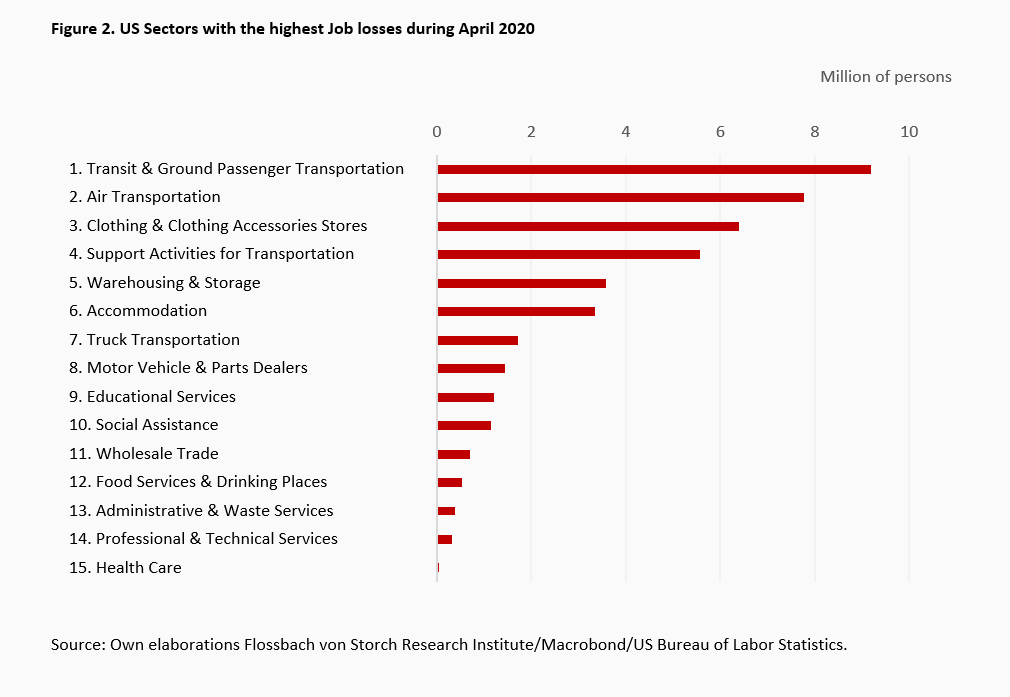 The USD 2.2 trillion economic relief law known as CARES Act, enacted by the US government in March, raised unemployment benefits to a level unseen since the unemployment insurance program was created in the 1930s. It offers an extra USD 600 per week to the recipients of unemployment benefits.4 This is much more generous than the USD 25 additional benefit granted during the Great Recession. The measure is set to end on July 31, but Congress could extend it, given that it is unlikely that the crisis is overcome by then and the presidential election campaign is looming.

Combining the two main forces currently impacting labor market – the lockdown measures and the generous unemployment assistance – the labor market is likely to move to a new state with a very high unemployment rate. The impact on wages is a priori uncertain. But, given the generosity of the unemployment benefits, it is to be expected that the unemployed will be discouraged to search for work and hence do not create a downward pressure on wages. Even if the extra USD 600 weekly payments expire, new measures, such as increases in minimum wages, would prevent the wage level from falling from its elevated level.

US policy makers face uneasy decisions in the coming weeks. Even if the current lockdown becomes more and more economically unsustainable and is likely to be eased soon, the decisions regarding the labor market involve difficult trade-offs between possible short-term political gains and ong-term economic losses.

Cutting unemployment benefits as early as of August would incentivize the unemployed to search for jobs, contributing to a faster recovery of the economy. However, the option is politically problematic, as it would reduce the income of those who presently get more benefits without working than they received wage income before – and this just before of an important election.

Should generous unemployment benefits be prolonged, the unemployed would have no incentive to look for work. Moreover, continuing uncertainty in the corporate sector could hamper investment or even intensify bankruptcies of financially stricken businesses. Thus, the longer the exceptional labor market measures and lockdown rules last, the higher the risk of negative long-term consequences both for the labor market and the economy at large. Hence, politicians will have to weigh short-term political benefits against long-term economic costs. More often than not, the short-term wins over the long-term in politics.

1 Alternatively, one could apply the micro-based wage-setting model. However, the main outcomes of the analysis point in the same direction.

2 In the textbook parlance, the downward sloping labor demand curve shifts to the left: for any given wage level less labor force is demanded.

3 The upward sloping labor supply curve shifts to the left.

4 Unemployment insurance is a joint federal-state program, but states control key factors, like benefit levels, so that benefits may vary significantly between states.

Stock market against the economy

While the economic forecasts are becoming increasingly gloomy and we are sliding into the deepest recession of the post-war period, the stock market is acting surprisingly calm.

In the aftermath of the Great Financial Crisis 2008-2009 and European debt crisis 2011-2012, the public debt ratios in G7 countries increased on average by altogether 40% of GDP. The coronavirus pandemic is likely to generate a much higher fiscal dam ...