The coronavirus pandemic is likely to cause a global recession. Italy is one – if not the – most exposed larger country to both the pandemic and recession.

The government has already responded to the crisis with a substantial package of fiscal measures, amounting currently (March 17) to EUR 25 billion. The increase of the public debt ratio as a result of measures to fight the pandemic and of the recession will sooner or later require an intense effort to ensure the solvency of the Italian state.

On March 5, the Italian government adopted an initial EUR 6.3 billion package of supportive measures for the economy. Upon the expectation that “economic activity [being] liable to fall more deeply and broadly in the near term”, the initial package was further extended on March 11 to EUR 25 billion, bringing the overall authorization to 1.1% of GDP. However, the latter figure will most probably increase both as a result of the fight against the pandemic and of recession. An economic downturn is now inevitable.

Figure 1 shows a simulation of the consequences of an economic crisis for general government gross debt. We simulate two scenarios: 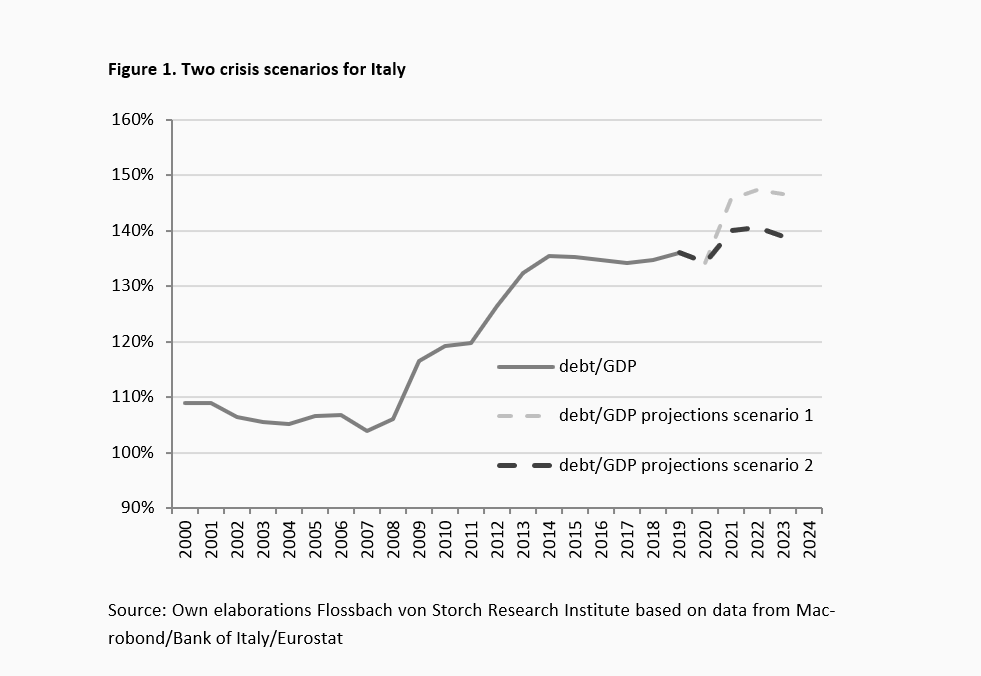 To design this scenario, we take as a reference the economic impact of the 2009-2010 recession. Although the two events are not fully comparable, the economic crisis following the Great Financial Crisis should be a sufficiently good reference to approximate for an economic damage caused by an unexpected event.

The impact of the coronavirus pandemic and recession create a deficit in the primary balance. Assuming a similar effect as in the economic crisis 2009-2010, the primary balance could worsen by almost 3 percentage points of GDP in 2020 and by 2.2 percentage points in 2021 compared with the average over the three years preceding the event. Accordingly, this would lead to a primary balance of -1.6% of GDP in 2020 and -0.9% in 2021. For the period 2022-2024 we assume a normalization of public finances, leading to an average annual primary surplus of 1.3%. This would correspond to an average primary surplus generated in Italy over the period 2017-2019.

Provided that the economic impact from the COVID-19 crisis would be less severe and that extensive monetary and fiscal stimulus would contain the downturn and gradually bring the interest rates levels to the pre-crisis period, the trajectory of the public debt in Italy would be milder compared with the previous scenario. However, this is contingent on two crucial assumptions, namely, that 1) the impact on the nominal GDP growth over the three years 2020-2022 would be only half as severe as under scenario 1 and the growth rate of nominal GDP would return to the pre-crisis normal of 1.8% afterwards, and 2) the average interest rate would increase by only 0.5 percentage point in 2020, converging gradually afterwards to the pre-crisis level of 0.9% in 2024.

Taking as reference the economic crisis from the recent past, this note analyses the likely fiscal consequences of the current corona crisis. Even a mild economic recession would bring the debt-to-GDP ratio in Italy to over 140% in the next two years. A recession twice as severe – which unfortunately seems more likely - would result in an increase of debt ratio by more than 10 percentage points, bringing it to 147% in 2022. Moreover, based on the experience of the last few decades, the rise of public debt in Italy is more likely to be permanent rather than only temporary.

With a debt ratio heading towards 150% of GDP it is unlikely that Italy will be able to access financial markets without external help. Given the limited funding capacity of the European Stability Mechanism, it seems inevitable that the European Central Bank will have to assume the role of the lender of last resort to the Italian government.

The trick of the Italian budget law

Italy escaped the EU excessive deficit procedure for now because the Italian government has curbed the three main electoral promises by underestimating the costs of the planned measures.

The ghost of the European doom loop

The stocks of sovereign debt held by banks especially in countries with vulnerable public finances and weaker banking systems have increased of late. Either could a further deterioration of public finances cause a banking crisis or growing problems i ...