Whatever it takes – to kill inflation or save the euro?

Consumer price inflation in Germany (and elsewhere) cracks one record after another. With first signs of a wage-price spiral emerging it seems that we are only at the beginning of an ongoing inflationary phase. For the ECB, it means an existential dilemma. If she fought inflation “whatever it takes”, she would risk the bankruptcy of highly indebted member states and the eventual break-up of monetary union.

The global economy is fighting against the spectre of high inflation. A strong upward trend in consumer prices - in Germany, the Eurozone, the US and many other countries - has been underway since around the beginning of 2021. In June 2022, year-on-year consumer price inflation was 7.6% in Germany, 8.6% in the euro area, and 9.1% in the US (Fig. 1). 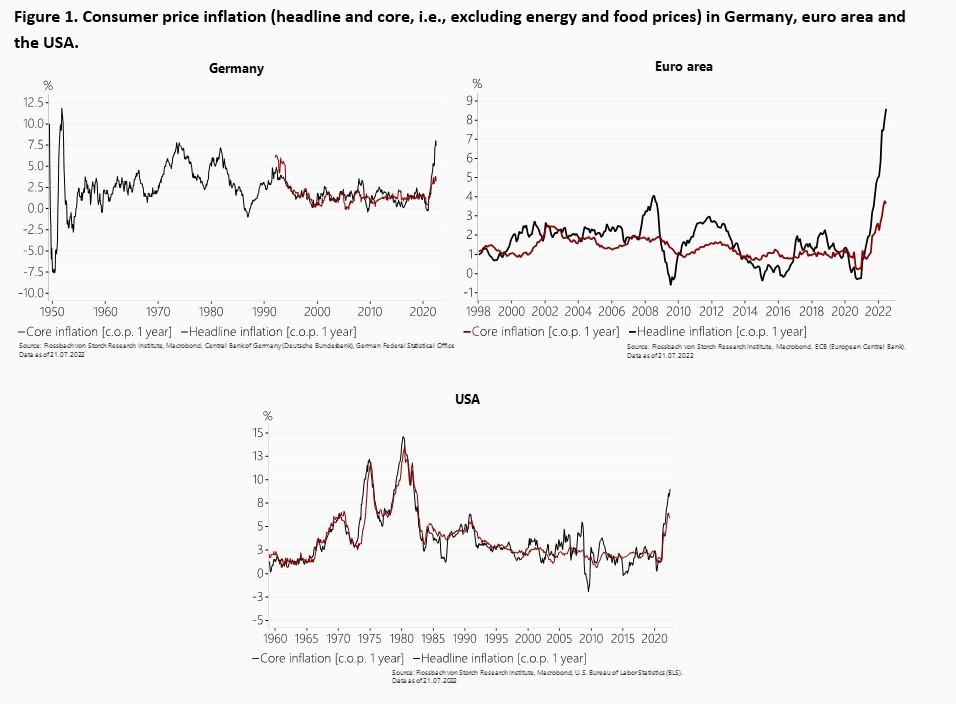 There are some specific although complex developments staying behind these inflation readings. An important explanation lies in the massive monetary expansion of the major central banks in the years preceding and during the Covid-pandemic (Fig. 2). This vast extension of money supply fed eventually the strong increase of aggregate demand. The latter was, however, incommensurable with the aggregate supply of goods and services. The supply-side shortages intensified eventually due to the Covid-pandemic. As a result of this excess in aggregate demand, prices of consumption goods in different parts of the economy started increasing. 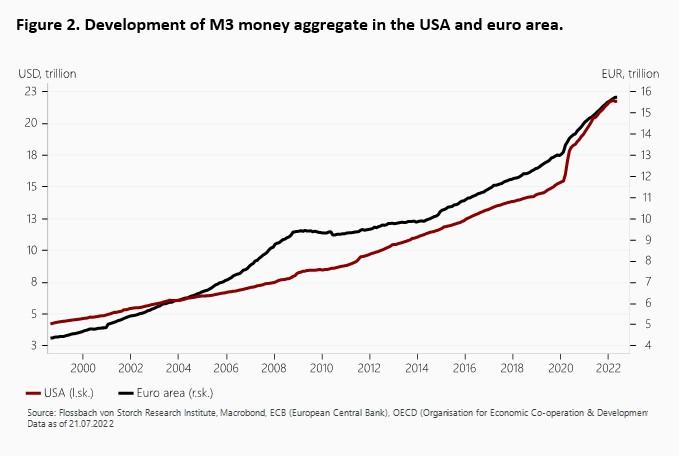 On top of that, additional influencing forces emerged. Especially since the beginning of the Ukraine war, prices for energy have risen noticeably. In June 2022, energy prices in Germany rose by 38% compared with the same month of the previous year. A similar dynamic was already observed in the months since March 2022. Since energy is an important input in production of various goods and services, prices in other consumption categories have started increasing recently. In the food sector, the German inflation rate in June was 12.7% - so far, the highest inflation rate since March 2022 (Fig. 3). The remaining categories of goods and services are currently less affected by rising prices. However, it is likely that the upward trend will soon prevail there as well. This will be all the more the case if the wage pressure, already observed in current wage bargaining processes, leads to subsequent rounds of price-wage increases. 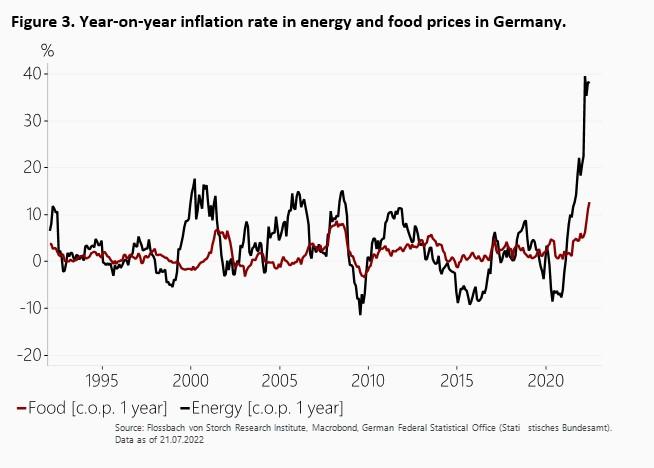 The German “concerted action” – much ado about nothing

In modern economies, it is the monetary policy authority that takes the main responsibility for price stability. However, with the euro adoption, Germany transferred its monetary policy sovereignty to the ECB. This implies that Germany – like all the other euro area member states – has only limited instruments to achieve price stability at the domestic level. One such instruments is the so-called “concerted action”, which has recently been launched by Chancellor, Olaf Scholz.

The idea of the concerted action is to bring representatives of workers' unions, employers, government and academia to discuss incomes policy to avoid inflation. The legal base for the concerted action was provided by the German Act to Promote the Stability and Growth of the Economy from 1967. At that time Germany’s monetary policy sovereignty was also limited by the participation in the Bretton-Woods Exchange rate system, where the D-Mark was linked to the US-dollar and the Dollar to gold. Against this background, incomes policy seemed useful to support fiscal policy for stabilizing the business cycle and containing inflation.

According to section 3 of the Act, "in the event that any of the objectives of section 1 are jeopardised, the government shall provide guidance data for simultaneous measures (concerted action) by local authorities, trade unions and employers' associations to achieve the objectives of section 1".1 On this basis, at the end of June Olaf Scholz announced the convening of the concerted action.

But, as past experience has shown, incomes policy is inconsistent with the institutional arrangement of “Tarifautonomie”, which assigns wage determination to unions and employer associations. Now as back then employers and trade unions resist the interference of politicians in wage negotiations. Moreover, when in the late 1960s and early 1970s unions yielded to government pressure for wage restraint, wild cat strikes flared up in 1969 and 1973. Eventually, in an act of self-preservation the trade unions withdrew from the “concerted action” at the end of the 1970s. Had the German government looked more closely at the historical experience, it would have refrained from the attempt to revive the “concerted action”.

Waiting in vain for the ECB

With incomes policy unavailable and fiscal policy too rigid to counter inflation, the focus returns again to the ECB. With the newest decision on July 21 to raise the ECB’s policy rates by 50 basis points one might be tempted to assume that the ECB is now determined to break the inflation wave. But the ECB is confronted with an existential dilemma. If she fought inflation “whatever it takes”, she would risk the break-up of monetary union as the overindebted member states would face bankruptcy, forcing them to leave EMU.

The return of inflation has unveiled the key defect of a monetary union of sovereign states. With governments unwilling to subjugate fiscal policy to the requirements of a stable common currency, the central bank comes under fiscal dominance and the common currency is destined for debasement. Hence, a “hard currency European monetary union” can only be established if the existing design is radically changed.2

2 For a proposal see Mayer, Thomas (2021) Liraisation of the euro – and then? Available in German at: https://www.flossbachvonstorch-researchinstitute.com/en/comments/liraisation-of-the-euro-and-then/, and Mayer, Thomas (2019) A digital euro to save EMU https://voxeu.org/article/digital-euro-save-emu.

Liraisation of the euro – and then?

Since the euro crisis, the Latin European countries have converted the European Monetary Union to their economic culture. The "liraisation" of the euro is likely to be irreversible. Euro countries that prefer a hard currency could realise this by cre ...

A digital euro to save EMU

In this paper I summarise my proposal, which has appeared in various publications, to relaunch the euro as digital central bank money.