Russia's trade relations with China have grown strongly over the past decade (Figure 1). In particular, the relative importance of Russia's exports to China as a share of total Russian exports increased significantly from 7% in 2012 to 15% in 2020 and 14% in 2021. Russia's imports from China have also increased in value as a share of total Russian imports, from 16% in 2012 to 25% in 2021. But as Russia accounts for only 2.8% of total Chinese trade, Russia relies on China more than China on Russia. 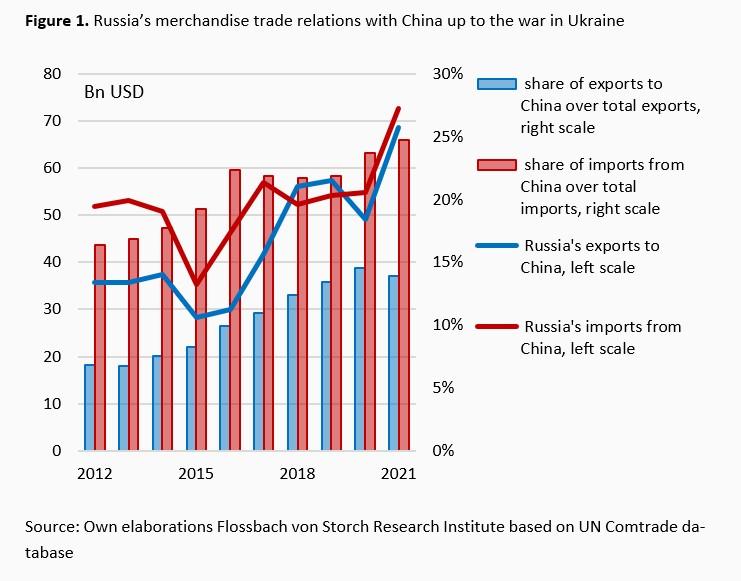 Before the war Russia traded intensively with other countries besides China (Table 1). Among Russia's top ten export destinations in 2021, the Netherlands, Germany, the UK, Italy, the US and the Republic of Korea together accounted for 30 % of total Russian exports. The same group of countries plus France imported 31 % of total Russian imports in the same year.

As a result of the invasion of Ukraine in February 2022 and the resulting Western sanctions, there were seismic shifts in Russia's trade relations. The seven trading partners mentioned above drastically reduced their trade relations with Russia, leaving gaps in supply chains as well as in sales opportunities for Russian producers. For example, while German exports to Russia in January and February 2022 were still above the levels of the respective months on average from 2018 to 2021, they collapsed by almost 56% thereafter (Figure 2). 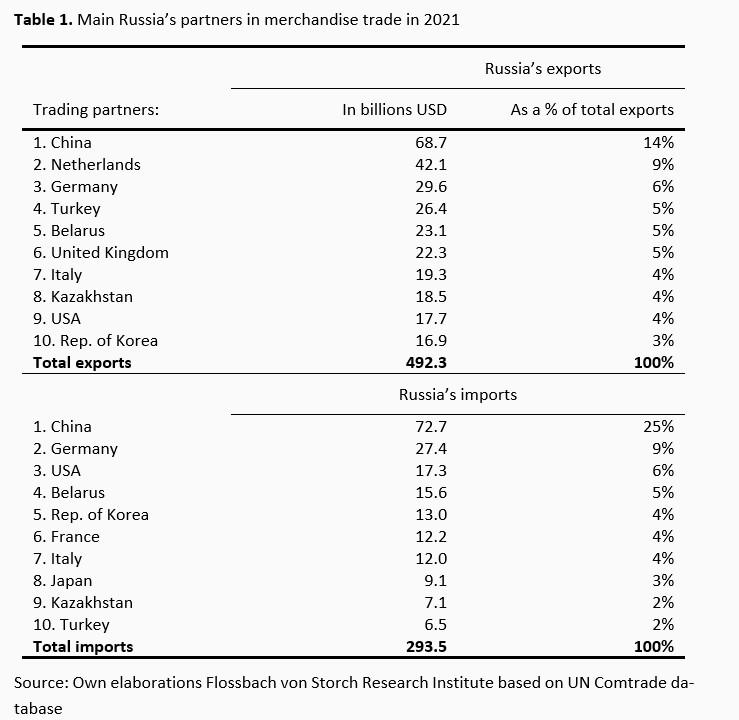 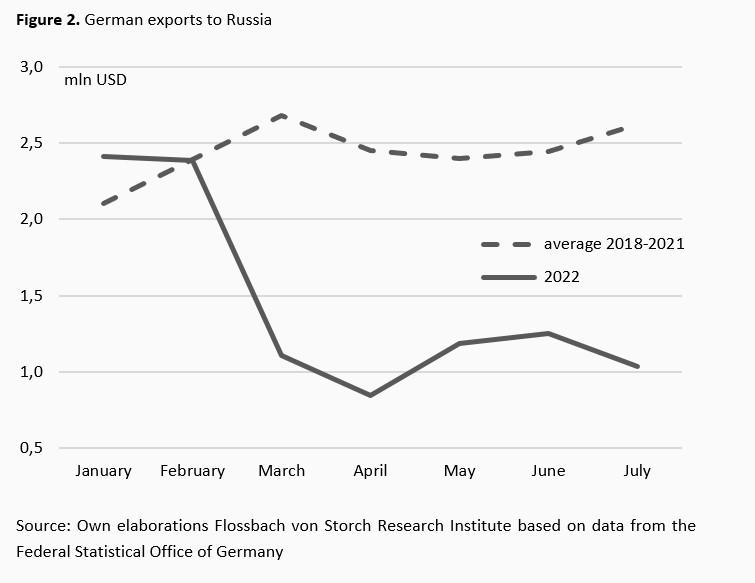 As Russian exports to Germany consist mostly of raw commodities and commodity prices soared, the decline of exports was much less pronounced than that of imports, with the corresponding figure in July 2022 still just above the 2018-2021 monthly average (Figure 3). However, as Germany weans itself from the dependence on Russian energy imports the trend is clearly downwards. Moreover, as almost 80 % of German imports from Russia are concentrated in mineral fuels, for which Russia has imposed a supply freeze of late, the disruption in bilateral trade relations between Russia and Germany is likely to be large and permanent. 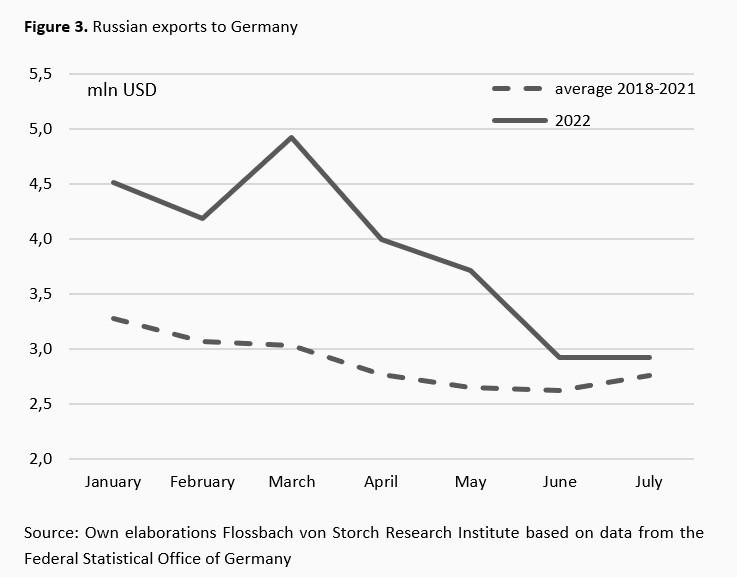 To fill the gaps in its trade relations, Russia made greater efforts to develop relations with countries that have not officially condemned Russia’s aggression against Ukraine. The strongest increase took place with China. Between May and July 2022, Russian exports to China were on average 52% higher than the corresponding figure for 2018-2021 (Figure 4). This substantial increase is mainly due to oil and coal exports and is expected to accelerate further as China is keen on absorbing gas supplies otherwise planned for Western Europe. 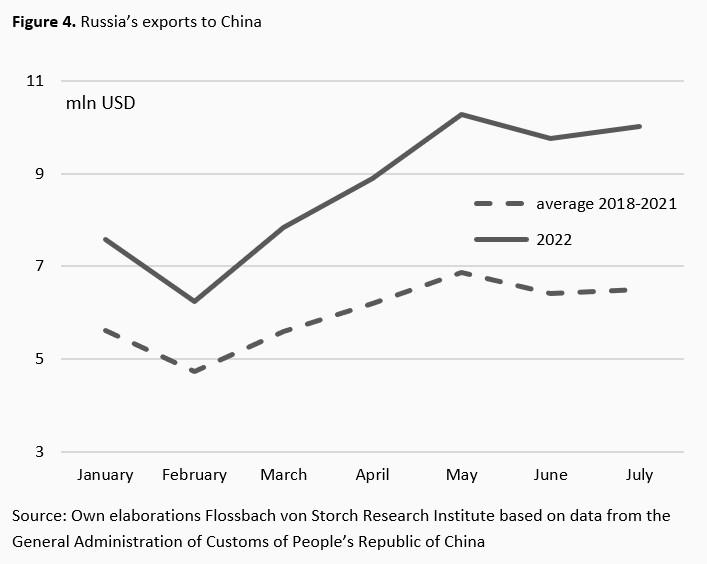 China's exports to Russia between January and July 2022 are also above the 2018-2021 averages and are likely to remain at high levels, providing Chinese companies with a unique opportunity to fill the vacuum created by the departure of Western brands from Russia (Figure 5). 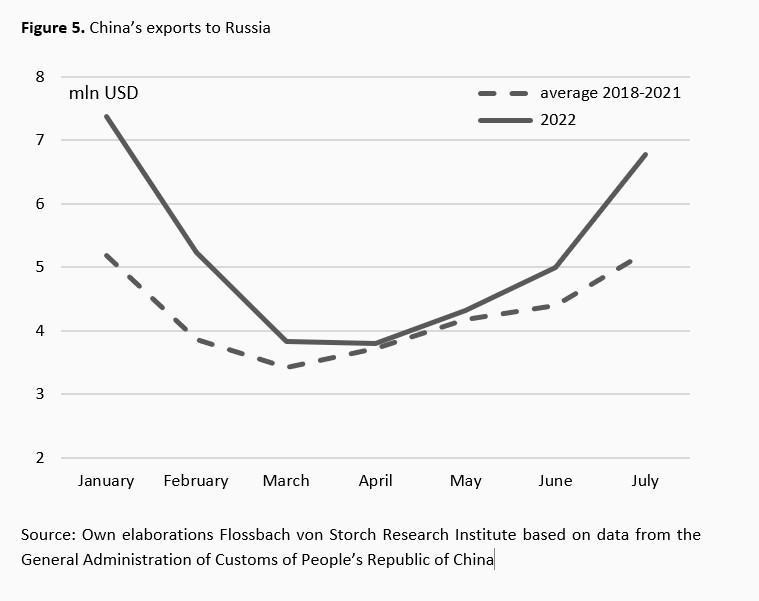 Friendship with “no limits”?

At their meeting in February on the occasion of the Winter Olympics in Beijing, the leaders of Russia and China declared that their friendship would have "no limits". At another meeting on 16 September 2022 on the sidelines of the Shanghai Cooperation Organisation in Samarkand, China's President Xi Jinping said his country was "ready to work with Russia" to realise each other's "core interests". The shared perception that NATO and the US pose an obvious threat to national security has brought the two powers closer together over the course of the war.

At the same time, however, the Indian and Chinese leaders voiced open or hidden criticism at Russia’s war against Ukraine. It has been reported that Indian Prime Minister Modi told President Putin that “today’s era is not an era of war”. That came after Putin acknowledged China’s President Xi’s “concerns” about the war in public remarks at the event.1

For China and India, supporting Russia means an increasing risk of undermining their own economic interests. In particular, Russia's military and technological support could draw Western sanctions against them. The fact that Beijing and New Deli have so far carefully avoided violating Western sanctions against Russia shows that they rely on Western capital and technology to support their ongoing development – at home and abroad. The two Asian powers will therefore probably seek to keep their options open as long as possible.

For Russia, its growing dependence on China and Beijing's continued dominance in bilateral relations are likely to increase the economic risks to the Russian economy should Chinese interests - for whatever reason - turn against Russia. But since Russia needs China more than vice versa, Moscow will be more willing than Beijing to regard this friendship as being with “no limits”.

1 For more details, see “Xi and Modi ‘not standing with Putin’ over war in Ukraine, analysts say”, Financial Times, September 18, 2022.

Before February 24, 2022, many were under the illusion that defense policy could be replaced by economic sanctions. Now some hope that one can duck away in war.

China and Putin's War in Ukraine

China is likely to have emerged victorious from the Corona crisis. However, the extent to which China can also profit from Putin's war in Ukraine is currently open.