The Corona Pandemic has hit emerging and developing countries in a time of high vulnerability. As is the case for companies, countries with a good governance structure and robust finances will weather the crisis better than badly run and fragile countries.

Emerging and developing market economies have had very turbulent weeks. Their currencies plummeted as oil prices dropped from 50 to less than 20 US dollars per barrel in one day and the most aggressive “sudden stop” in capital flows in recent history took place. As the advanced economies are still shut down, China’s economy is just slowly reactivating and the number of COVID-19 cases in emerging countries is rapidly increasing, the financial distress is just starting. In its report entitled “Global Waves of Debt” a group of economists at the World Bank warned in December last year that emerging market economies are highly indebted and therefore especially vulnerable to an economic downturn:

“Emerging and developing economies already are more vulnerable on a variety of fronts than they were ahead of the last crisis: 75 percent of them now have budget deficits, their foreign currency denominated corporate debt is significantly higher, and their current account deficits are four times as large as they were in 2007. Under these circumstances, a sudden rise in risk premiums could precipitate a financial crisis, as has happened many times in the past.”1

Even abstracting from China, the debt load of emerging market economies is worrisome (Figure 1). 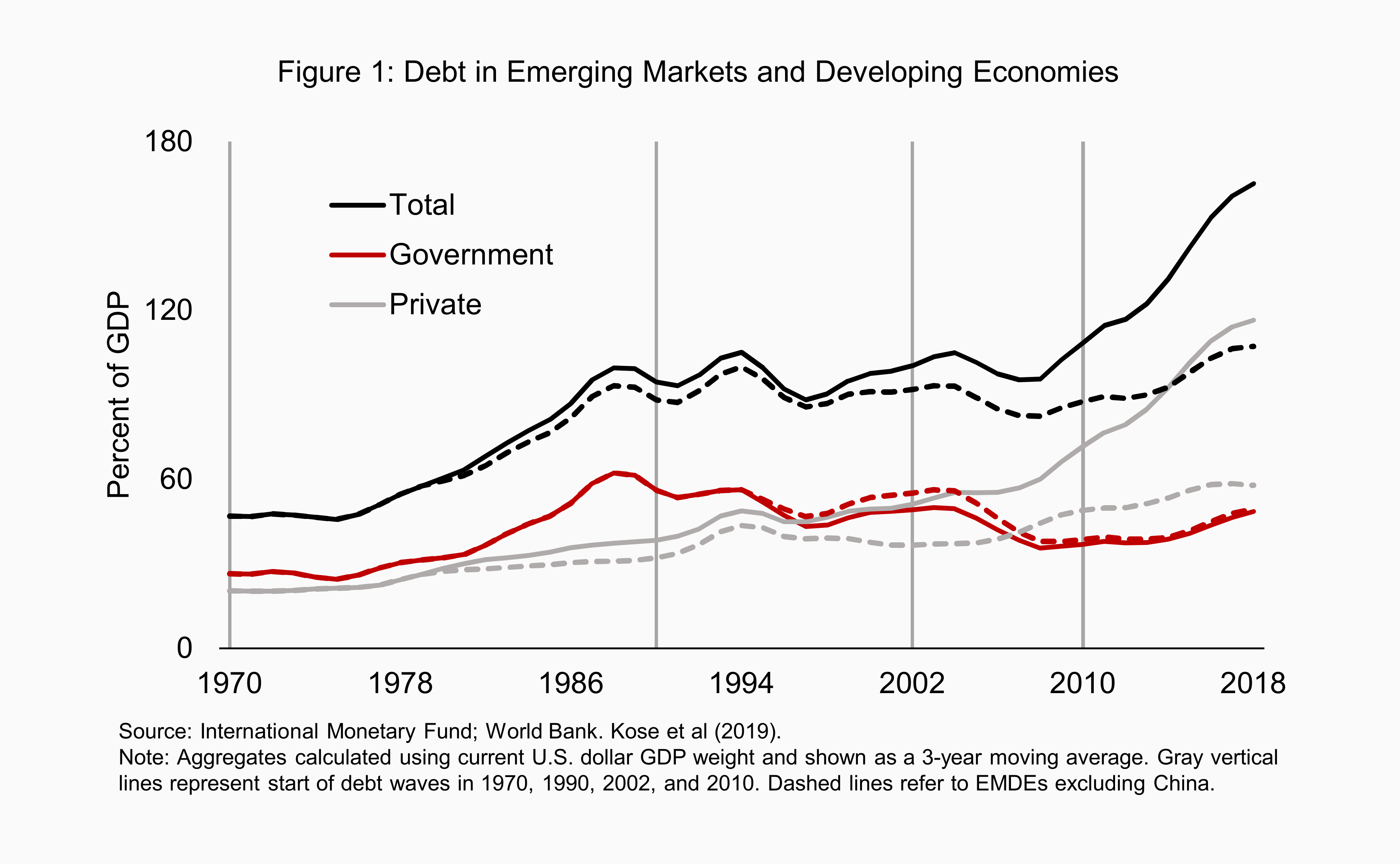 The Corona pandemic, which currently sweeps through industrial countries, is starting to hit emerging market and developing countries at a time of high vulnerability. The countries will suffer both from the fall-out of recession in the industrial world and the effects of the virus on their national economies and health systems. It is therefore not surprising that financial markets are taking an increasingly skeptical view of emerging market assets, as evidenced by the sharp drop in the exchange rates of these countries (Figure 2). The depreciation between March 1st and April 2nd of six currencies among a group of major emerging markets was especially sharp. The currency that has experienced the strongest loss in value with respect to the US Dollar is the Mexican Peso with a depreciation of 21.36% followed by the South African Rand (17.91%) and the Brazilian Real (16.82%). 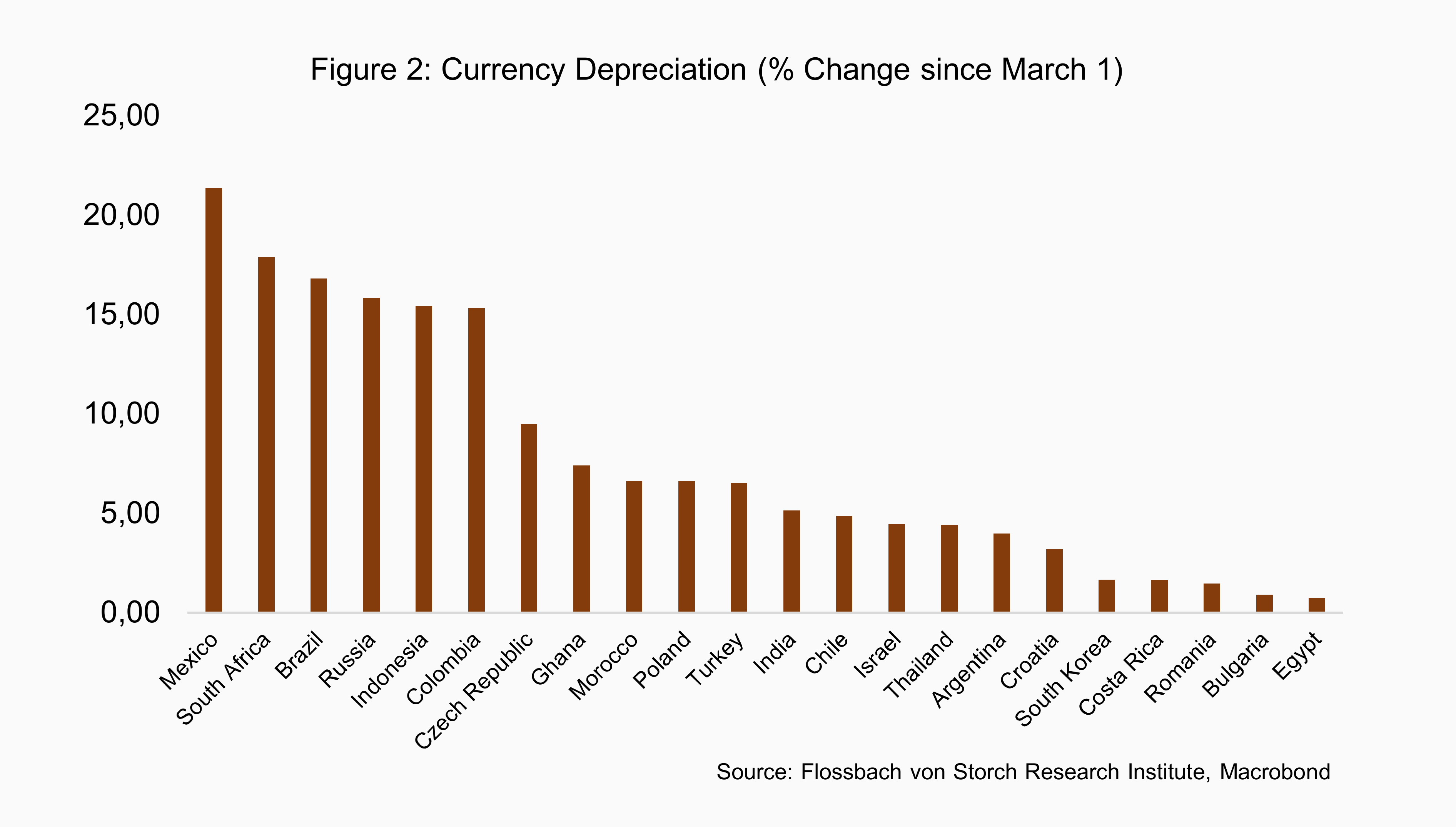 In the current situation, policy makers face a dilemma. Since the strong currency depreciations cause inflationary pressure and make external debt (denominated in US Dollars) increase, central banks could increase interest rates to try to slow capital outflows and sell foreign exchange reserves to support the currency. These measures, however, are contractionary. With collapsing national economies and severe fiscal policy strains, this is hardly an option. Financial assistance from multilateral institutions such as the IMF and the World Bank could help fund the capital outflows associated with expansionary policies, but the resources of these institutions are limited. In the event, governments in severely distressed economies will probably have no other choice than to take recourse to capital controls in order to prevent a crash of their currencies.

Restrictions to capital outflows have been used during past economic crises to lower pressure on the exchange rates. During the Asian crisis of the late 1990s countries like Thailand and Malaysia introduced controls in the form of limited international convertibility of the national currencies and the requirement to surrender foreign exchange earnings from exports at the central bank (export surrender requirements). More recently, Iceland implemented capital outflow controls after the outbreak of the global financial crisis in 2008 mainly restricting capital transactions and limiting the offshore convertibility of the currency.

Irrespective of the immediate ability to support the currency and the scope for economic policy that could be gained, countries are still reluctant to use capital controls. An important reason might be that officials anticipate the cost: losing (hard-earned) reputation and a decrease in their attractiveness for international investors.  Whoever implements capital controls will likely see fewer capital inflows in the aftermath of the crisis.

It is not straight forward to try to predict which country is more likely to introduce capital controls. Some fundamental issues, however, might give a rough indication. Despite the strength of the currency depreciation, the existence of a “swap line” with the Federal Reserve and the amount of foreign exchange reserves ease pressure on the currency. Among the hardest hit currencies, Mexico and Brazil were recently granted a temporary swap line which enables their central banks to provide local funding in US Dollars. Russia, India and Brazil have relative high amounts of foreign exchange reserves (97, 95 and 78 percent of GDP in 2019, respectively). South Africa, on the other hand, does not have a swap line and has foreign exchange reserves of roughly 10% of GDP. 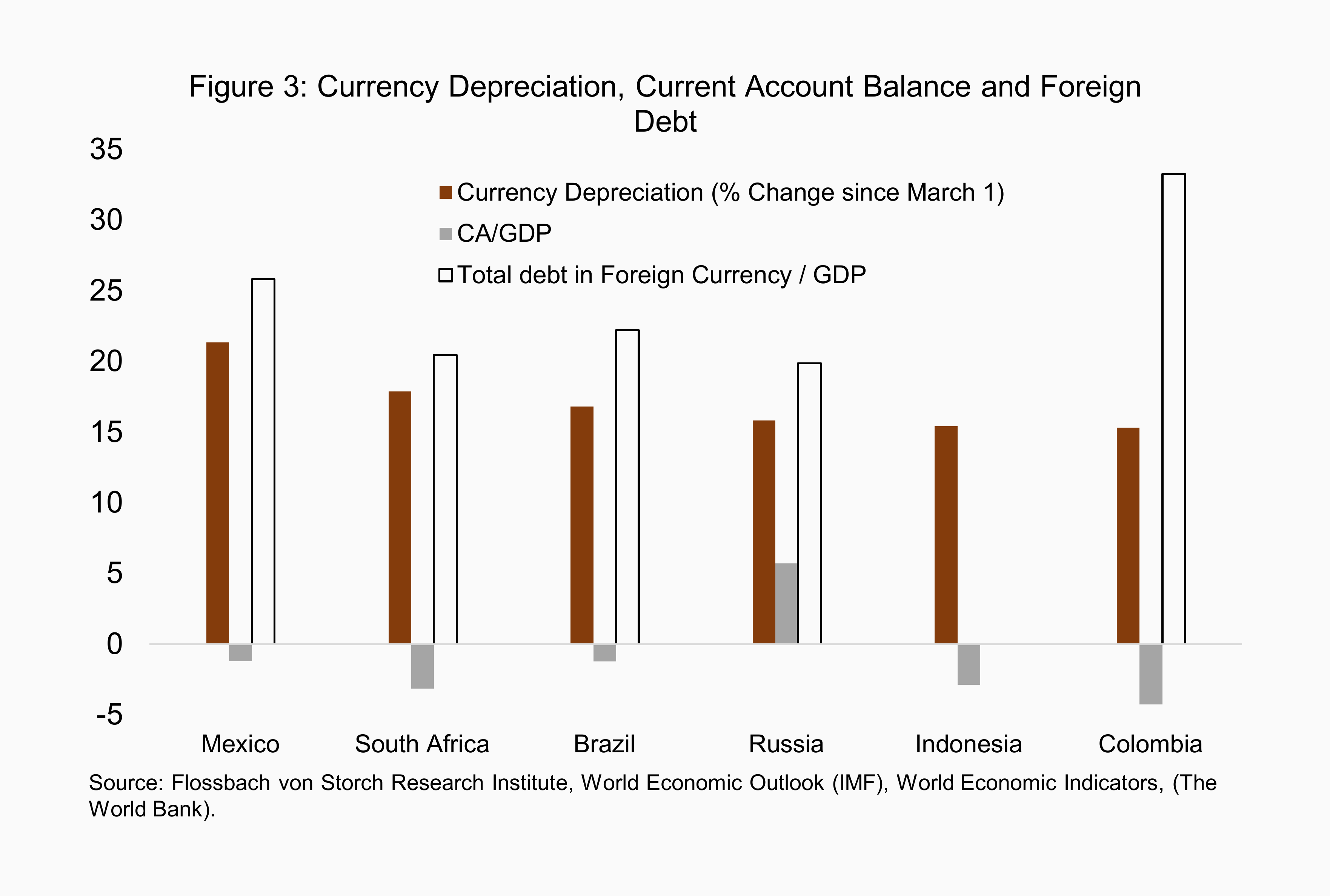 A further relevant aspect is the need for immediate external finance and the foreign currency denominated debt. Figure 3 shows, that, for the six countries with the strongest currency depreciation, the current account deficits, i.e. the imports that have been financed using external capital, are strongest in South Africa, Colombia and Indonesia (none of these countries has a swap line with the Fed). The amount of debt by the end of 2019 denominated in foreign currency, mainly US Dollars, was highest in Colombia (33% of GDP) and Mexico (26 % of GDP).

In the event, investors may learn to differentiate among Emerging Market countries instead of shunning the entire class of EM assets. As is the case for companies, countries with a good governance structure and robust finances will weather the crisis better than badly run and fragile countries.

The Coronavirus, the Surge of the US Dollar and the Risks for Emerging Markets

The corona crisis has caused the strongest capital outflows from emerging and developing countries in recent history. The next turbulences are close.