What is actually behind the hype about the Modern Monetary Theory (MMT)? The charismatic US Democrat Alexandria Ocasio-Cortez helped the MMT to attract a lot of attention at the beginning of the year, but now the wave seems to have abated again. What's the problem?

Despite the recent renaissance and the word "modern" in the name, the basic ideas of MMT can already be found in works by Knut Wicksel (1898) and Georg Friedrich Knapp (1905).1  Put simply, it suggests that states can print money indefinitely to finance their expenditures, since they cannot default in their own currency. This would enable a simple way to full employment and prosperity - a fantastic narrative. Recently, the theory has been supported by the fact that despite excessive money printing in the US, Europe and Japan, inflation is absent.

As simple and beautiful as the MMT may sound, it is hard to believe that social and economic problems can be solved that easy. Not only did Germany have to experience the bitter truth at the beginning of the 20th century that money printing does not lead to prosperity, but Zimbabwe and Venezuela are currently suffering from hyperinflation. Furthermore, money printing inflation is not really absent, at least in Germany and Europe. The price increase is taking place in areas that are not taken into account in the official calculation of inflation statistic: Asset prices have risen rapidly in recent years.2

The MMT forms a narrative that promises economic upswing and full employment since its idea is easy to understand and to pass on. The narrative is quickly picked up and passed on through discussion, press and social media. It acts like a virus that spreads across the population. However, one is quickly cured, if not even immunized, as soon as one informs oneself further.

The graphic below shows how often articles on "Modern Monetary Theory" have appeared in the Bloomberg news database. Since the beginning of 2019, the number has risen sharply and peaked in mid-March. Subsequently, the frequency of these publications declined significantly. 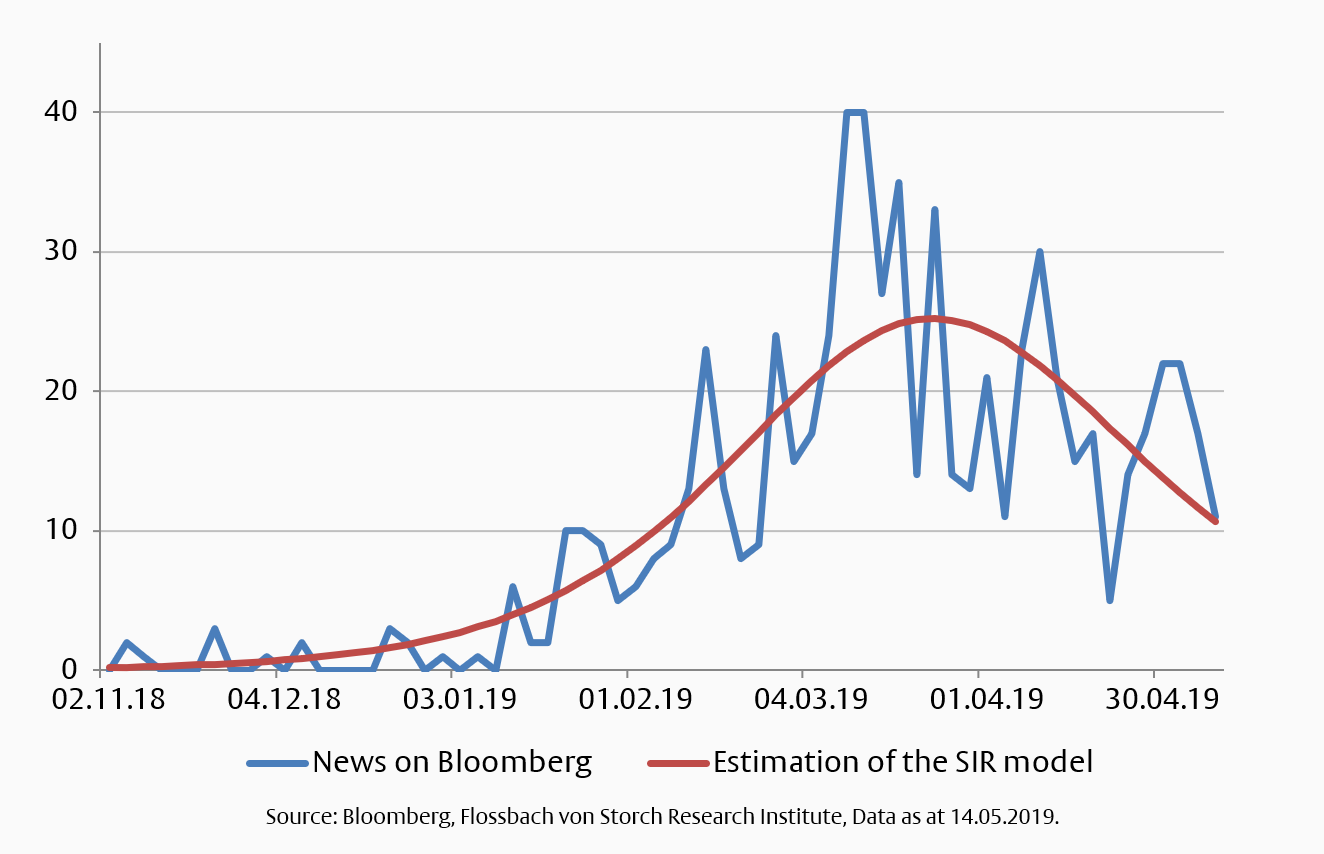 With the help of the SIR model of epidemiology, one can determine the contagious power and recovery rate of a narrative.3 The estimated contagiousness of the narrative is very high at 44%. This means that in 44 out of 100 cases the new host absorbs the virus and passes it on. As high as the infection is, as high is the recovery rate at 30%. Out of 100 infected people, 30 are quickly cured. Within the SIR model healing even stands for immunization, which means that one cannot be infected again.

The narrative of full employment and prosperity has helped the MMT to a hype. But now the hype is fading away and threatens to disappear from the scene. Since simply too much speaks against the realizations of the theory, most let off fast from it again.

In order to burst out again, the MMT-virus has to mutate first. Perhaps the pre-election campaign of the US Democrats or other prominent characters standing up for the theory will cause a contagious mutation. Then it will become clear whether the immunization against MMT was permanent or only temporary.

All articles by Philipp Immenkötter