The ECB is revealing an increasing ambition to enlist monetary policy in the fight against climate change. This is a questionable idea for at least three reasons. First, the central bank does not have an appropriate mandate to do so. Second, monetary policy is a weak substitute for fiscal and industrial policy in this area. Finally, the economic reasoning behind the greening of monetary policy is weak. Thus, the ambition of the ECB seems to be driven by an ever stronger will to seize more power.

In July 2021, the Governing Council of the European Central Bank decided on “an ambitious roadmap to further incorporate climate change considerations into its policy framework”. This step is driven by the conviction that “climate change and the transition towards a more sustainable economy affect the outlook for price stability through their impact on macroeconomic indicators such as inflation, output, employment, interest rates, investment and productivity; financial stability; and the transition of monetary policy.”1

The main activities in the fulfilment of the commitment should comprise, most importantly, a new macroeconomic modelling effort to monitor the implications of climate change, a collateral framework for Eurosystem credit operations with consideration of relevant climate change risks and “environmental sustainability” disclosure requirements for private sector assets, and an adjusted framework of corporate sector asset purchases to incorporate climate change criteria.

The ECB’s greening endeavour parallels similar developments elsewhere. In August 2021, five members of the US House or Representatives urged US President Biden “to re-imagine a Federal Reserve focused on eliminating climate risk.”2 Also the Environmental Audit Committee of the British Parliament has encouraged the Bank of England to conduct its bond purchases accounting for the borrowers’ carbon emissions.

Regarding the channels, both supply- and demand-side effects were identified. On the supply-side, heat stress may be detrimental for labour supply and its productivity. The capital stock and technology may be affected negatively through the diversion of resources away from innovation towards reconstruction, adaptation and protection. The resulting lower factor productivity growth would imply 1) lower expected incomes and thus the need to save more in the future to sustain future consumption, and 2) lower return to investment. Accordingly, the natural rate of interest (r*) would eventually decrease (Fig. 1).

The impact on the demand-side seems to be less straightforward. Regarding consumption, climate change may lead to a net increase in energy consumption (due to increased energy demand in summer prevailing over reduced energy demand in winter). At the same time, consumption may shift towards more sustainable goods and services, with, however, an unclear net effect. Also, investment is supposed to shift in this direction. However, increased overall uncertainty may lead to delays in investment. Under an a priori uncertain net effect on investment, the natural rate of interest may either decrease or increase. Finally, due to geographical changes, such as rising sea levels, as well as volatility in food prices, disruptions to foreign trade may occur (Fig. 2). 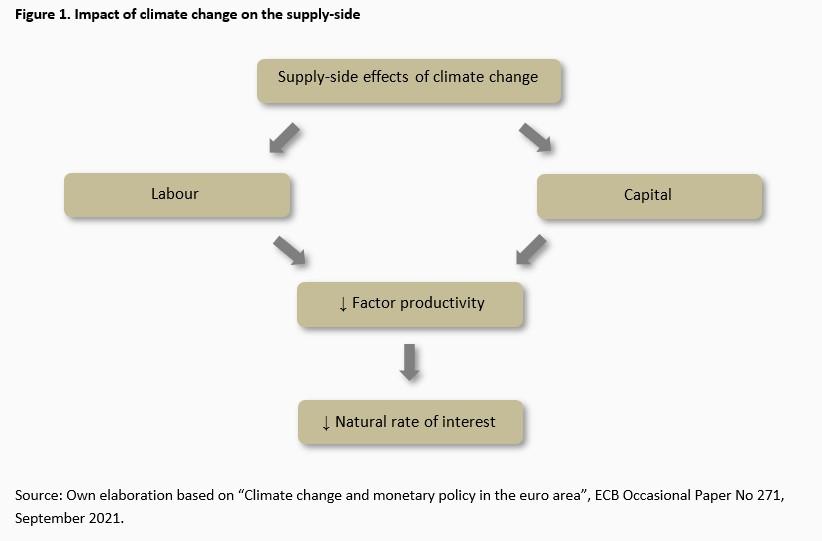 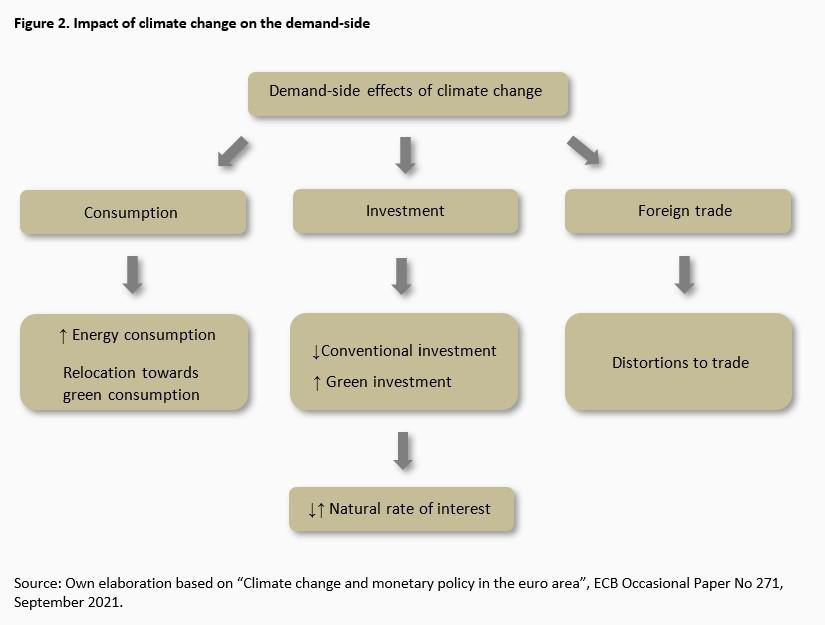 Beyond macroeconomic effects, climate change is argued to impact the financial system. Based on stress testing, it is claimed that, upon a disorderly transition, financial institutions and investors might experience significant asset and capital losses. Moreover, financial markets are deemed to under-value environmental externalities, leading to distorted prices. Finally, shifts in investor and consumer preferences towards sustainable goods and services may generate stranded assets, leading to large swings in asset prices.

Economic reasoning behind the ECB’s greening

The approach of green monetary policy is based on the conviction that macroeconomic and financial market disruptions resulting from climate change could affect the transmission of monetary policy and thus the ability of the ECB to achieve its price stability goal.

More specifically, the transmission channel may be impacted via instability in the financial system due to, e.g., the sudden repricing of climate-related financial risk. Moreover, although the ex-ante effect on the natural rate of interest is unclear, the ECB’s experts claim – admittedly under an a priori questionable assumption of prevailing dampening forces on r* – that the “policy rate could hit the effective lower bound more often, limiting the monetary policy space for conventional tool.” Finally, uncertainty deriving from climate risks may render difficult the correct assessment of the medium-term inflation outlook.

Accounting for these various factors and, most importantly, given the potential impact on the outlook for price stability, the ECB saw itself compelled to adjust its monetary policy to a more intensified climate action.

Problems with the ECB’s greening

Although climate change is viewed by various experts as the biggest challenge of our time and efforts might be desirable to fight against it, monetary policy engagement in this regard is ill-suited – for three main reasons.

First, the ECB does not have the mandate to do so. The provision in Article 127 of the Treaty on the Functioning of the European Union (TFEU) states that the Eurosystem “shall support the general economic policies in the Union”, but only if there is no “prejudice to the objective of price stability”. Since, however, the same ECB experts identify multiple channels through which climate policy would impact inflation and inflation expectations (see Table 3 in the Occasional Paper), green monetary policy could eventually exacerbate the achievement of the price stability goal.

Second, monetary policy is a weak substitute for fiscal and, especially, industrial policy in this area. The latter are much better equipped to seize climate policy action through instruments such as carbon pricing and investment in green innovation. Engaging monetary policy in economic policy actions with potentials for social and economic rearrangement – which thus belong to the responsibility of politicians, subject to the risk of losing elections – risks exposing the central bank to reputational damage and a loss of independence.

Third, the current state of understanding of the economic implications of climate change is still incomplete. This is well-recognized by the ECB’s expert themselves, claiming that “[c]limate change poses challenges for the macroeconomic models used by central banks for forecasting and policy analysis”.3 But even if the underlying conceptual gap regarding climate change in the framework macroeconomic modelling were eventually closed, the past experience of central bankers applying such models in making reliable economic predictions is not particularly encouraging. For years these models over-predicted inflation, and now they have underpredicted it. But if central banks cannot predict inflation well enough to fulfil their primary mandate, their ambition to model the economic impact of climate change for policy purposes seems to be a particularly blatant presumption of knowledge.

The mix of the limited historical evidence, long-term horizons over which the relevant economic consequences are likely to occur, and models lacking a solid track record result in a great speculation rather than prudent, responsible and credible decision-making.

2 The statement is available at: https://ocasiocortezforms.house.gov/news/email/show.aspx?ID=MDUGONUR3FA2A.

Policymakers have plunged into climate actionism and set ever stricter climate goals. This can have unintended social and economic consequences.

Sustainable investment - a term with many facets

The EU Commission wants to direct more capital flows into sustainable investments in the future in order to make a contribution to the implementation of the Paris climate protection agreement. A necessary condition for this is that a uniform understa ...