From epidemiology we know that viral infections spread in cycles. An analysis of the spread of the coronavirus shows, however, that the cycle is shaped not only by biological but also by social dynamics. Instead of a bell curve, familiar from epidemiological models, the spread takes place in shorter cycles or waves.

Early epidemics studies have concluded that viral infections spread in a bell curve pattern.1 Initially, each infected person passes on the virus several times and the number of active cases increases exponentially. When a critical amount of people has built up resistance to the virus, i.e. society has reached the famous "herd immunity", more people begin to recover from the disease than become infected. The course of the diseases reaches the peak of the bell curve and weakens again. This pattern can be observed in the course of influenza infections every year since the 1980s. 2

At the beginning of the coronavirus pandemic, some experts and politicians took the view that by accepting the increase in the number of infections herd immunity was likely to be achieved and afterwards, the disease would disappear on its own. It soon became clear, however, that the number of deaths associated with this strategy was socially unacceptable. Policymakers set out to combat the increase in the number of infected people. An interaction emerged between the biological dynamics and the political and social response to the spread of infections.

It turned out that the political reaction was essentially driven by four factors: (1) the development of the new infections, (2) the capacity of the health system to efficiently care for the patients, (3) the expected economic damage through social distancing and the subsequent financial support by the governments, and (4) the social acceptance of the policies adopted. The reaction of the citizens was influenced by (1) the type and intensity of the government restrictions to public life, (2) their own assessment of the health risk, (3) the expected personal economic loss and (4) the inclination of each individual to comply with or resist the restrictions of public life.

Biological dynamics and societal response have great similarities across countries. Figure 1 shows the waves of infection for 12 countries, with the horizontal axis indicating the logarithm of the total number of cases per million inhabitants instead of time. Since the epidemic did not develop at the same pace everywhere, the societal response did not depend consistently on days or weeks, but on the total level of infection numbers. The vertical axis shows the logarithm of the weekly mean of new cases per million inhabitants. The logarithmic representation causes an exponential increase in the number of infections to appear as a straight line. 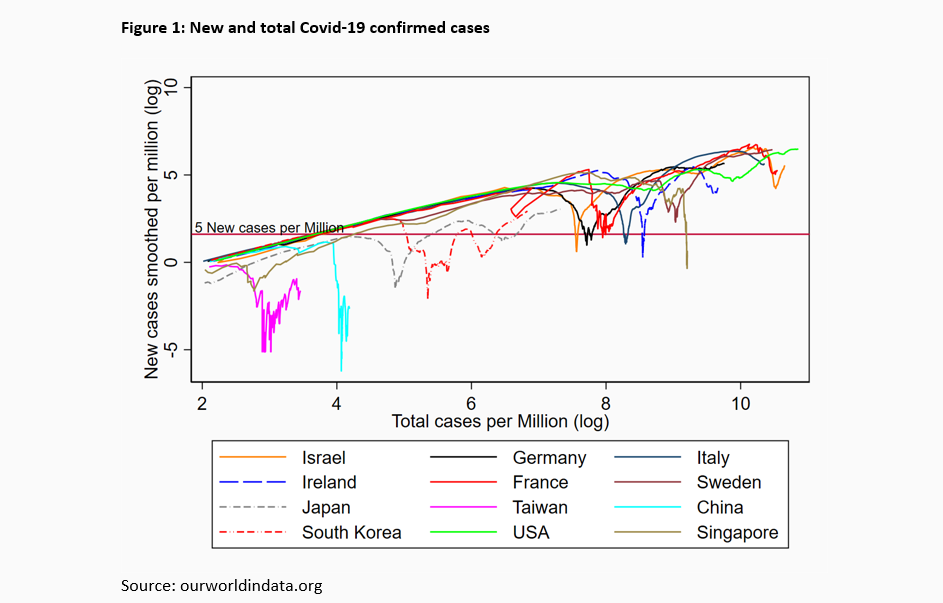 Taiwan, Singapore and China are the only countries of the sample where the total number of infections is currently just moderately increasing. After a period of exponential rise, the number of new infections decreased dramatically. The epidemic was contained before the social response could have a visible impact on its course. The experience of these countries with the predecessor virus SARS-COV-1 probably played a role.

In the other countries, the interplay of biological and social dynamics determined the course to a much greater extent. After a phase of exponential increase, the reaction began in the form of government restrictions, which were strongly determined by the increasing burden on the health system. A lesser role was played by the expected impact on economic growth and social resistance. With the forced and voluntary changes in social behaviour, the number of new cases decreased. The reduced number of new cases, the collapse of economic activity and the increasing aversion to lockdowns then spurred a renewed change in behaviour, such that new cases rose exponentially again. The increase triggered once more a series of government restrictions on public life, this time giving a larger weight to the negative economic impact and potential for social unrest, given the social pressures and experiences from the first wave.

The observed pattern can be statistically corroborated. A principal component analysis of panel data from 37 countries with sufficiently long infection series, reliable data and sufficient testing capacity (as defined by WHO) shows that 93% of the total variation can be explained by three common principal components. From this result we can conclude that not only the biological but also the social dynamics of the epidemic have very large commonalities worldwide.

The fastest responses to changes in the total number of infected people were in Japan and South Korea. Western Europe and the USA reacted more sluggishly. At similar levels of total cases per million inhabitants, Israel, Germany, Italy, Spain and Ireland saw a sharp decline in the number of new cases, while Sweden and the USA showed a less strong response. Several Western European governments seem to be using the number of new cases as a guide to action. When the number of new infections fell below the mark of 5 new cases per million inhabitants, they relaxed the measures and new cases increased exponentially again. 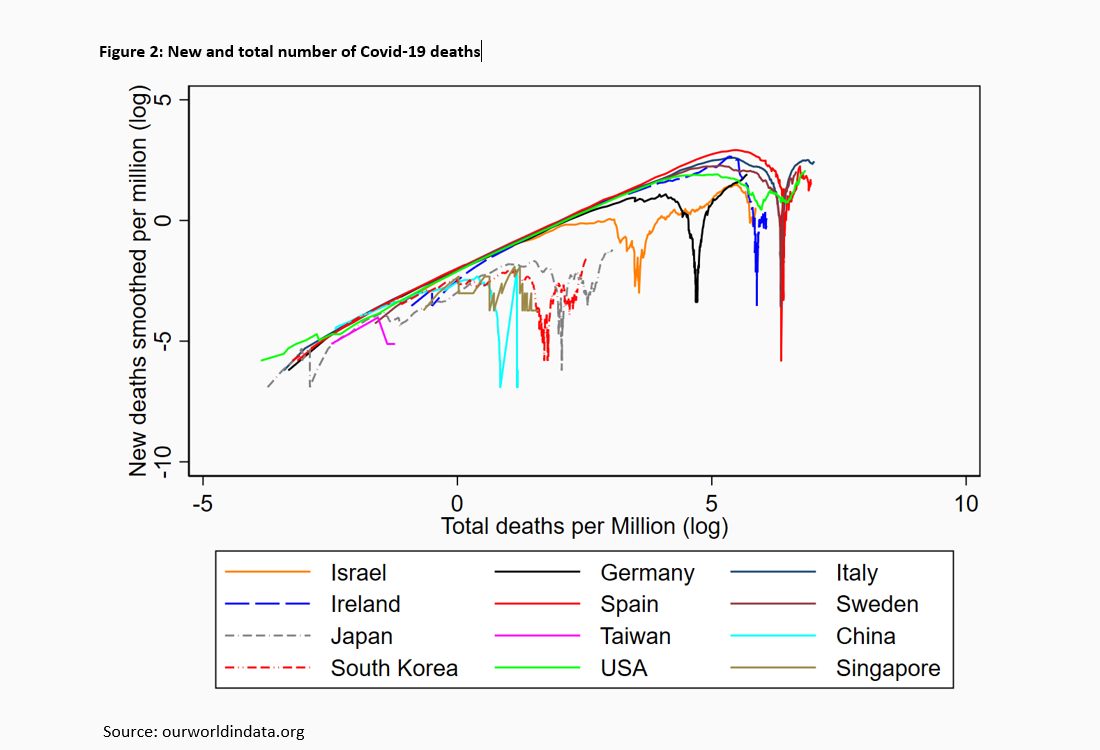 As observed in the infection figures, the number of new deaths is also declining again in Israel, Italy, and Spain. In other countries, however, new measures have been crafted with greater consideration of the economic impact and possibility of social resistance. It is still an open question how long governments will be able to impose restrictions at the expense of economic activity and against social resistance. As the US elections have shown, the crisis management of current incumbents will be crucial for voters. In 2021, presidential or parliamentary elections will be held in Germany, Japan, the Netherlands, the Czech Republic, Chile and Peru, among others. The promised easing for the Christmas season suggests that governments fear above all a decline in social acceptance. Experience so far suggests that the number of new infections will rise again after Christmas, triggering a new wave of government restrictions. Presumably, the cyclical dynamics will also continue in this way until herd immunity is established through vaccination.

1 See the commentary "Corona: What noodles, rice and bell curves have in common", and the video "How curves are created".

Corona: What pasta, rice and bell curves have in common

While the pasta and rice shelves in German supermarkets are slowly being emptied and one gets the impression that the neighbours are preparing for a long quarantine, one should once again keep in mind how epidemics typically progress.

In Great Britain, politicians are currently often shown off when confronted with the false-positive rate of tests for the coronavirus. Calculations suggest that the majority of all newly infected people are not ill at all, but rather that the tests ...