What if China is navigating towards higher inflation?

Inflation in China is still moderate. However, there are increasing signs that this could change soon.

Most developed countries, but also parts of the developing world, have recently experienced a surge in inflation. In China, inflation is still moderate, but recent developments suggest that this could change soon. What policy options does the Chinese government have to stabilise inflationary pressures?

As the world recovers from the Covid 19 pandemic and there is a substantial oversupply of money in the system owing to unprecedented fiscal and monetary stimulus, economies around the world are running at full speed. The unexpectedly high growth has led to a rise in inflation not seen for over a decade (Fig. 1). This has already led to some concrete monetary policy steps to stem the rising price pressures. The Federal Reserve Bank of New Zealand as well as the central banks of Brazil, Poland and Czech Republic have all recently raised interest rates. The US Federal Reserve announced at its November meeting that it will reduce its bond purchases. Other major central banks are considering similar steps. 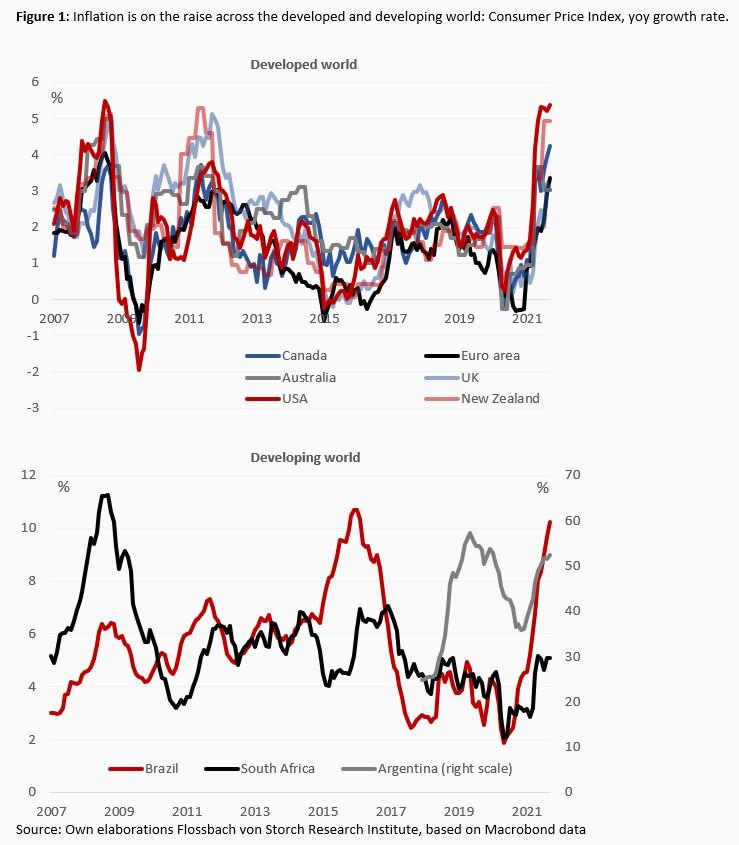 Instead, consumer price inflation in China has so far remained low, although it had temporarily risen to 5.4% at the start of the pandemic in January 2020 (Fig. 2). 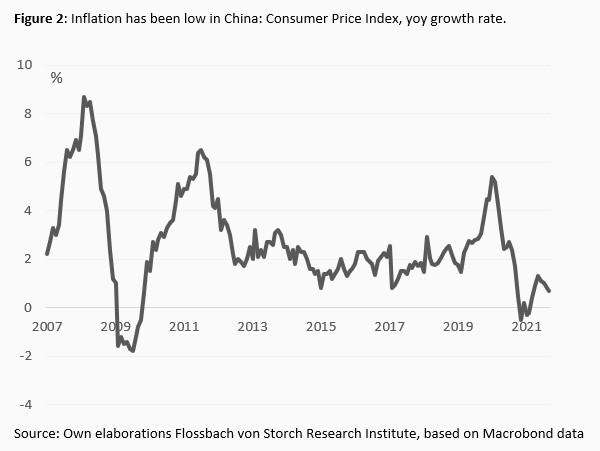 However, a closer look at recent price developments in China in the main CPI consumption categories reveals a differentiated picture. Since mid-2020, some inflationary pressure has built up in housing prices (rent and housing), which contribute 25% to the overall CPI. A similar trend is evident in some less weighty CPI-categories such as transport and communication (CPI weight of 15.4%), recreation and education (CPI weight of 8%), footwear and clothing (CPI weight of 6.3%) and household facilities, articles and services (5.2%) (Fig. 3). 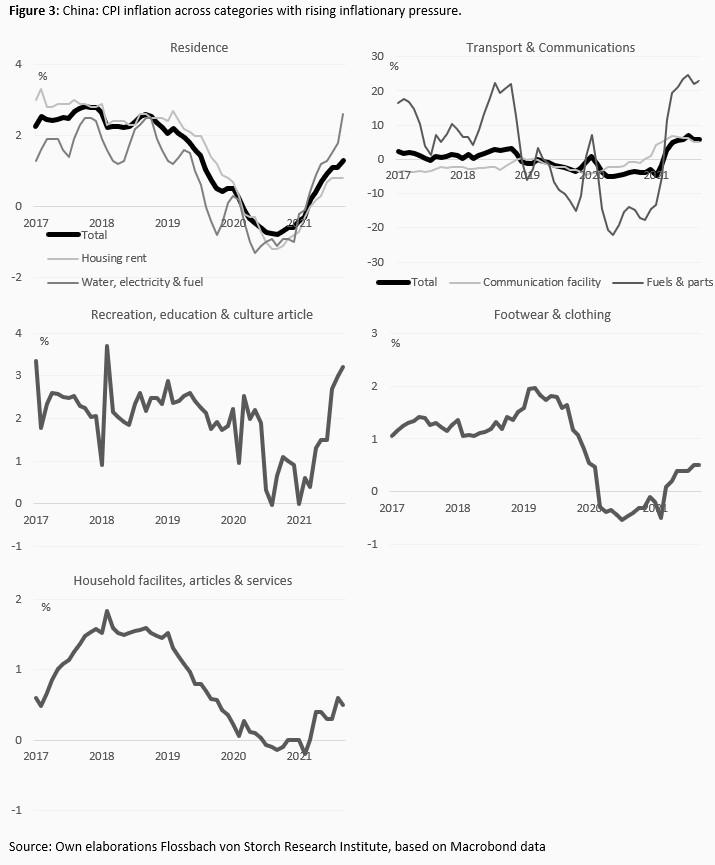 At the same time, the inflation trend in the most important CPI category of food prices (CPI weight of 29%) has so far not shown any acute upward trend (Fig. 4). However, this picture could soon reverse for at least two reasons. First, at the aggregate level, producer price inflation in China has moved from a low of -3.6% in June 2020 to a recent high of 10.7% in September 2021. With few exceptions, producer and consumer prices have historically tended to move in tandem, implying that higher producer prices could eventually lead to higher consumer prices (Fig. 5). 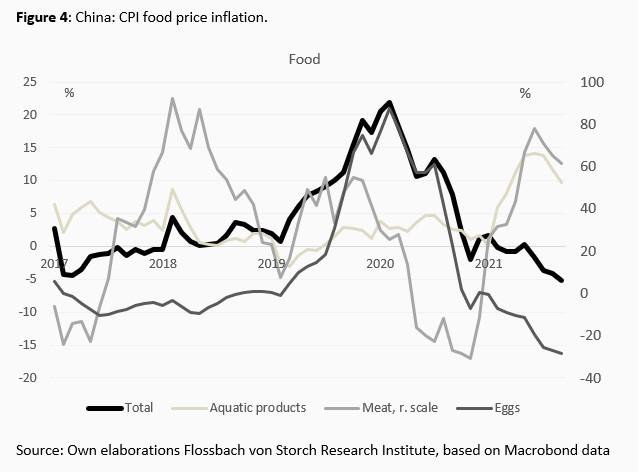 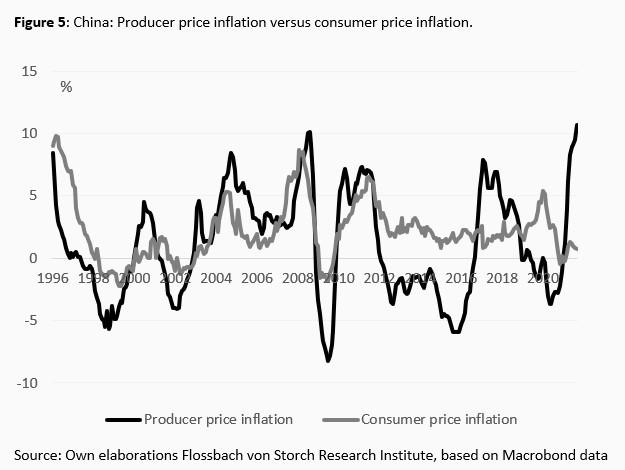 Second, at a more disaggregated level, there are reasons to believe that faster price dynamics are already underway, especially for certain food categories. There is anecdotal evidence of significant price increases for food categories such as cucumbers, spinach and broccoli, but also for soy sauce, yeast and beer. This may be exacerbated by the Chinese government's recent directive asking households to stockpile daily food items for emergencies. This has already prompted consumers to increase their demand not only for biscuits and instant noodles, but also for household appliances, especially radios and torches.1 Such policy measures are likely to exacerbate already acute bottlenecks in the supply chain, which could lead to spillover effects on other sectors and ultimately set in motion a vicious circle of rising prices and worsening supply shortages, which in turn lead to further price increases.

In most developed countries, central banks have the explicit mandate to keep inflation low and stable. To this end, they use various conventional (interest rates) and unconventional (e.g. asset purchases) monetary policy instruments. China's monetary policy authority, the People's Bank of China, also has the formal objective of “to maintain the stability of the value of the currency”.2 However, the Communist Party still has the final say on relevant economic policy decisions, e.g. on controlling price developments.

This peculiar economic policy framework has the advantage that administrative decisions, e.g. to combat rising prices, can be taken, implemented and become effective with much less delay than is normally the case in a normal monetary policy framework with lengthy and complex transmission channels. Indeed, administered prices, such as price ceilings, can be introduced with a regulation and be effective immediately. Similarly, policy measures that prescribe concrete implementation steps, such as the recent request by the Chinese Ministry of Commerce to local authorities to buy and store vegetables, can in principle be implemented immediately.3 At the same time, there are also downsides, as any public intervention interferes with the free-market mechanism and causes inefficiencies and welfare losses. Such losses may be felt with a lag or even only after the underlying policy intervention has been withdrawn. This was the case during the last inflation spikes in China in the 1980s, when the process of price adjustment and liberalisation took place. After the authorities lowered administered prices, inflation jumped as administered prices were lower than market clearing prices.4

Recent price dynamics in some relevant sectors of the Chinese economy suggest that consumer price inflation may gain momentum in the coming months. Should the rise in inflation require decisive policy intervention to combat it, the economic policy framework in China seems to offer some additional flexibility in decision-making and implementation. However, managing inflation has always been a difficult balancing act, and this time will be no different in China.

1 Based on a Reuters article, available at: https://www.reuters.com/world/china/china-urges-families-keep-stores-daily-needs-ahead-winter-2021-11-02/ and Business Insider, available at: www.businessinsider.com/china-vegetables-more-expensive-than-pork-fueling-food-inflation-fears-2021-10.

2 Based on official information from the website of the People’s Bank of China: http://www.pbc.gov.cn/en/3688006/index.html. See also Gehringer, A. (2015) “Monetary policy made in China”, Flossbach von Storch Research Institute, Economic Policy Note 1/7/2015, available at: https://www.flossbachvonstorch-researchinstitute.com/fileadmin/user_upload/RI/Studien/files/study-150701-monetary-policy-made-in-china.pdf.

While the European Union is preoccupied with itself with costly "reconstruction programmes" after the Corona crisis and loftily proclaimed "Green New Deals" for climate protection ("man-on-the-moon-moment"), a change in the world that has been going ...

Where does the strategic rivalry between China and the USA lead?

A new bipolarity could generate global growth and prosperity losses if one of the new poles aims at economic unbundling of its sphere of influence from the other pole.