In the aftermath of the Great Financial Crisis 2008-2009 and European debt crisis 2011-2012, the public debt ratios in G7 countries increased on average by altogether 40% of GDP. The coronavirus pandemic is likely to generate a much higher fiscal damage.

Economic recessions tend to have painful fiscal consequences. The public debt ratios rise due to both a lower GDP (smaller denominator) and higher public deficit (greater nominator). The latter effect is, in turn strongly dependent on the former, as declining GDP leads to higher expenditures and lower tax revenues.

The experience of the Great Financial Crisis and of the European debt crisis shows how strong the debt explosion could be. Between 2007 and 2012, the debt to GPD ratio increased by altogether 40% on average in the group of G7 countries (Figure 1). The crisis was widespread and all G7 countries (plus Spain) were strongly affected. Japan and Spain experienced the fastest debt increase of 53 and 50 percentage points, respectively (Figure 2). Moreover, this experience shows that the debt increase tends to be permanent. Only a few countries were able to reduce their debt burden after 2012. 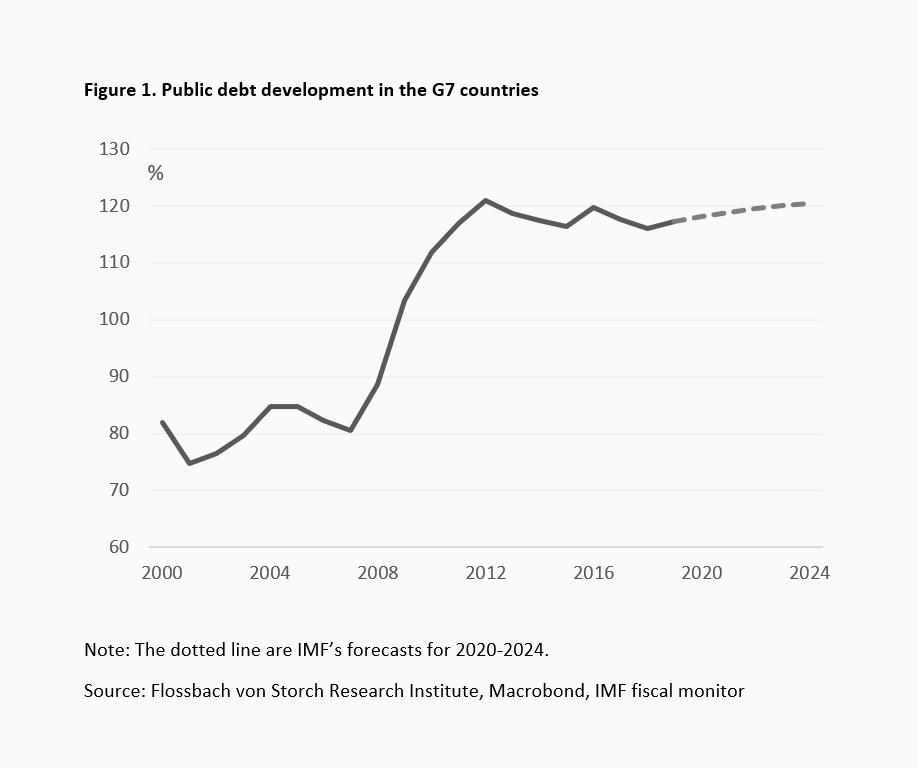 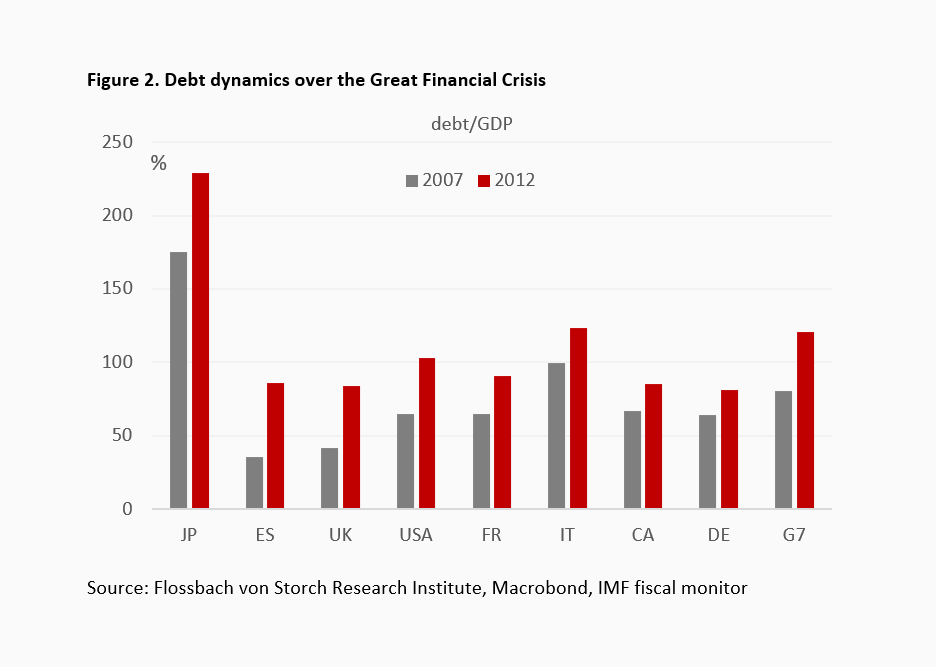 The coronavirus pandemic is likely to trigger the next strong wave of debt accumulation. To gauge the impact of recession and policy measures for this year, we make an educated guess of: 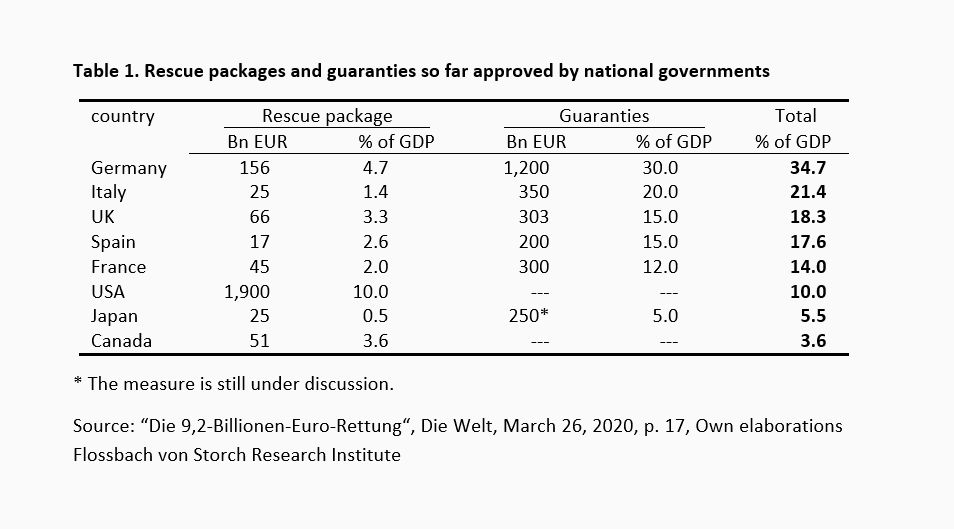 As a rule, gross public debt can increase through three main sources: 1) a higher government budget deficit, resulting from more expenditures (due mainly to the fight against the pandemic) and lower tax revenues, 2) participations in companies, and 3) credit guaranties. The increase in net debt is of course smaller as only a part of the participations and credit guarantees will eventually need to be written off. In our simulation, we focus on gross figures to assess the total potential impact and use the currently available information as reported in the last column in Table 1.

Both assumptions could of course either under or overestimate the true impact. Our assumption for the drop in GDP is higher than the average 3.6% decline in 2009, but we think that the widespread economic standstill in some of the major nodal points of the global economy could have created more substantial (though shorter) disruptions to economic activity than was the case in 2009.

The assumption for the government packages is also uncertain, as it is difficult to predict which part of the already announced measures will eventually be used and whether more measures will still follow. The latter is likely to be the case for countries most hit by the coronavirus pandemic, especially Italy and Spain. 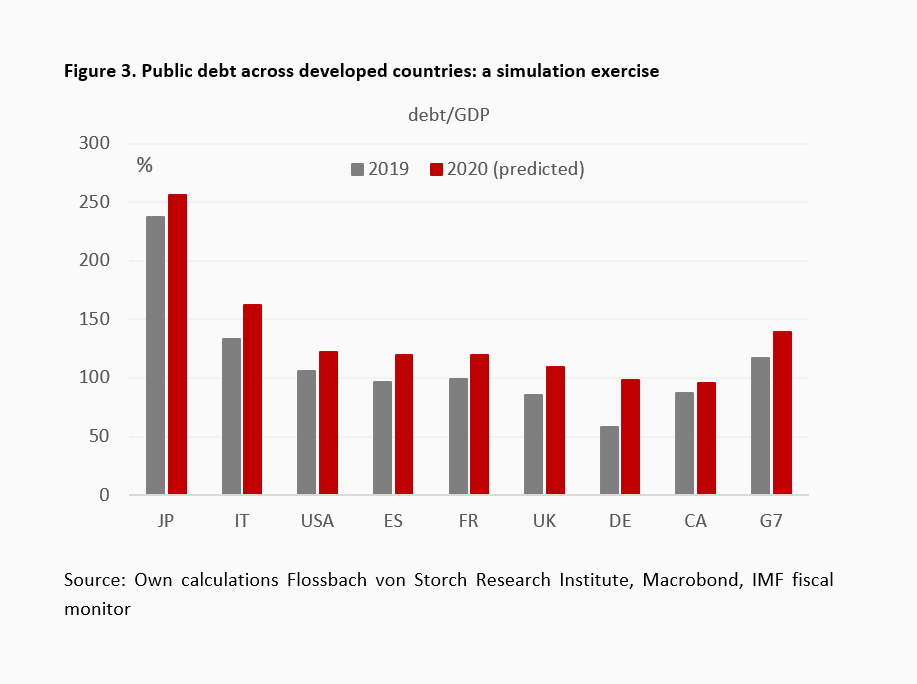 As the example of Japan shows, almost any public debt ratio can be sustained when the central bank provides the funding and inflation remains low. In this case, the public is willing to hold either the bonds issued by the government or the money issued (through the banks) by the central bank. The monetary system gradually converges to 100% money – as suggested by Irving Fisher et al. in the Chicago Plan of 1933 – without the general public noticing it. This door to a gradual move to 100% money is open for the US and other countries where the government rules over the central bank. But things are more difficult in the euro area.

Formally the door for central bank financing of government debt is closed. But without access to central bank financing of highly indebted EMU countries, the euro would most likely break apart. Hence, the door to ECB funding for governments is informally open. Efforts since the financial crisis to fully mutualize government debt (and bank risks) have so far not been successful. It remains to be seen whether the present health emergency offers a better opportunity for the highly indebted countries to force others to share their debt burden. Whether they succeed or not, the ability of individual countries to take advantage of increasing their debt through ECB funding or issuance of euro area bonds without having to suffer the consequences is likely to induce a competition of borrowers, and eventually the debasement of the euro.

The increase of the public debt ratio in Italy as a result of measures to fight the coronavirus pandemic and of the recession will sooner or later require an intense effort to ensure the solvency of the Italian state.