How much rate hikes can US businesses take, Mr Powell?

Anyone who still had doubts about whether the US Federal Reserve (Fed) was really serious about tightening monetary policy was proved wrong in April. Fed Chairman Jerome Powell recently prepared the stock market for the start of noticeable increases in the key interest rate. The reason is the (too) high price increases in the USA. In March, consumer prices rose by 8.5 percent compared to the same month last year.1 The Fed considers inflation of a good two percent a desirable target.

Now investors are wondering how aggressive the Fed will be when it comes to interest rates. James Bullard, head of the regional central bank in St. Louis, advocates a key interest rate of 3.5 percent by the end of the year. Currently, this is still in the target range of 0.75 to 1.00 percent. Bullard, however, stands alone. The expectations of the twelve members of the Fed Open Market Committee (FOMC) are lower. The market, measured by the Fed Funds Future, also expects key interest rates not to approach three percent this year (chart 1). 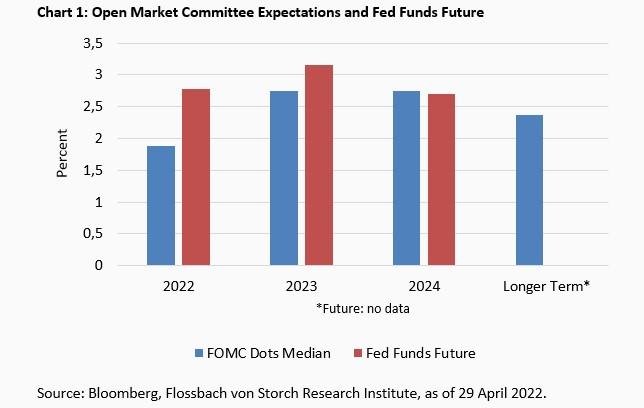 On May 4, the Fed raised its key interest rate by 0.5 percentage points. It is not only the short-term interest rate level that depends on this. If further increases in the key interest rate are expected, this will also have an impact on longer-term yields and thus on the refinancing costs of companies.

In addition, the valuation of companies changes on the basis of discounted future cash inflows. The higher the interest rate in the present, the lower the current company value determined on the basis of estimated cash flows. And greater uncertainty about future cash inflows should actually also increase the risk premiums for determining current, supposedly fair company values. For the stock market, the development of interest rates is therefore relevant in several respects.

A stable stock market is not an explicit goal of the Federal Reserve. Experience shows, however, that the Fed takes Wall Street's interests into account when making decisions because it believes that Wall Street and Main Street are closely linked. How many interest rate hikes the US economy and thus the stock market can tolerate should therefore be an important question.

The first thing to note is that the yield on ten-year US Treasuries reflects the expectation of moderate further rate hikes (chart 2). 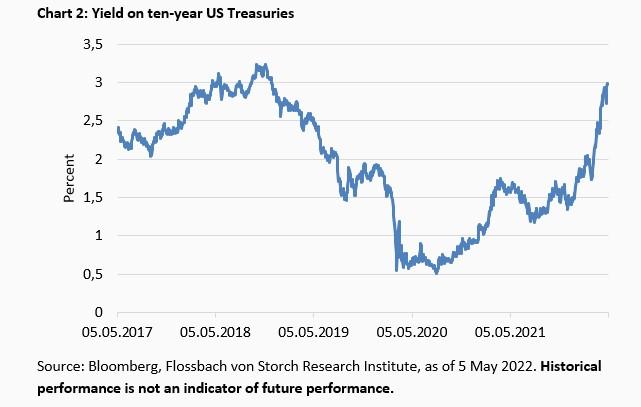 However, since last autumn the spread between the yields of US government securities and the yields of US corporate bonds has widened noticeably (chart 3). So it seems that the markets expect monetary policy to weaken the economy and thus increase credit risk. 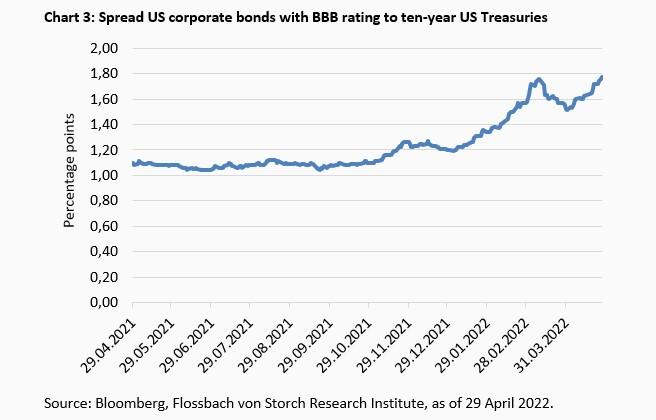 Either way, how much interest burden companies can shoulder depends on their balance sheet stability, but more importantly on their earnings and cash inflows relative to their debt. For example, from 2017 to 2021, annual pre-tax profits of non-financial US companies averaged $1.4 trillion. The annual net cash flow of all US companies averaged just over $2.5 trillion in the five years mentioned (chart 4). 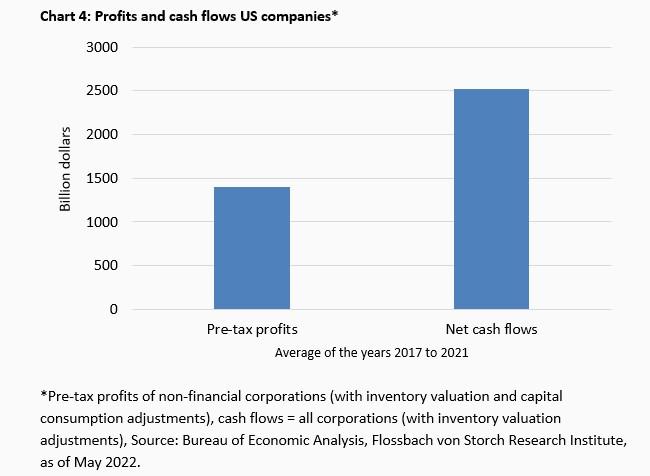 The debt of non-financial corporations most recently amounted to almost 11.7 trillion dollars (chart 5). A one percentage point increase in coupons would therefore reduce average net cash flows by almost 120 billion dollars or almost five percent - not taking into account that the cash inflows also include cash flows from the financial industry. In fact, higher interest rates reduced the cash flows of non-financial companies even more than the five percent mentioned. In any case, the pre-tax profits of non-financial companies fell by 8.4 percent with refinancing costs that were one percentage point higher. If the interest rate level changed upwards by 2.5 percentage points, then pre-tax profits were reduced by a good fifth, ceteris paribus. 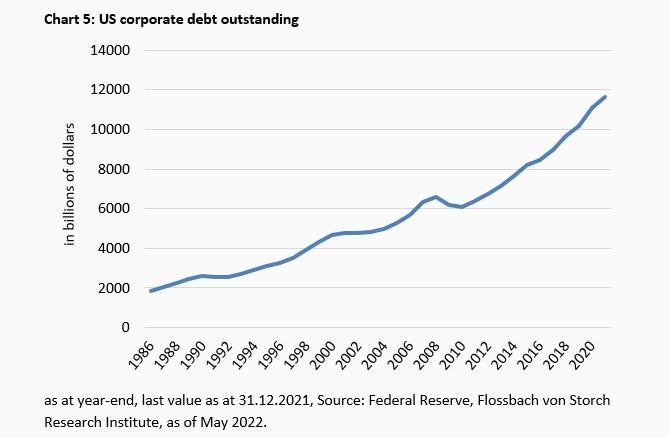 In fact, yields are already heading in this direction. Measured against the average yields for US corporate bonds from the investment grade universe, the refinancing costs per annum have already doubled from around two percent last autumn to a good four percent at present. Companies that now want to roll over a billion dollars in debt are therefore paying an average of 20 million dollars more per year in interest than just a few months ago (chart 6). 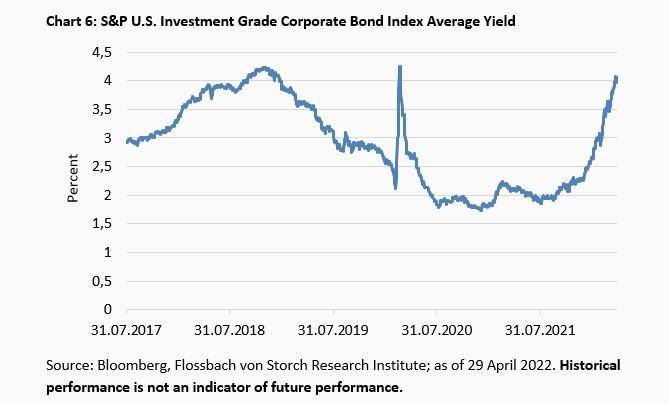 The rise in high-yield bonds is also significant. Since autumn, yields have risen by half to an average of 6.7 percent at the end of April (chart 7). 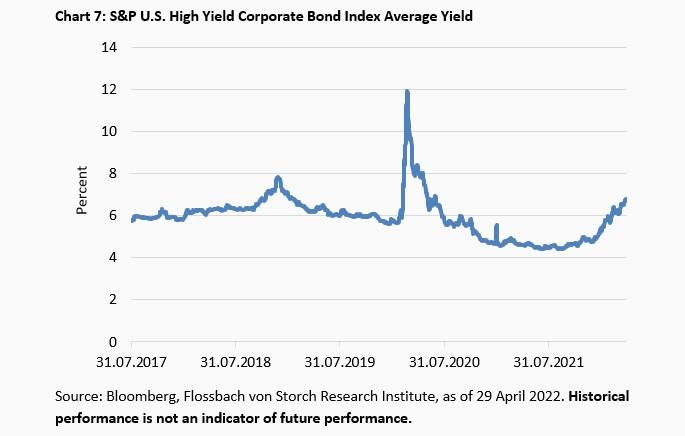 Depending on the industry, debt sustainability presents itself differently. While the classic basic industry, for example, has good ratios for interest coverage and the ratio of debt to operating profits before asset devaluations, the capital goods industry (mechanical engineering) or the energy sector have recently looked mediocre.

On average across all sectors, the debt-to-Ebitda (earnings before interest, taxes, depreciation of property, plant and equipment and amortization of intangible assets) factor is just under 3.5 and the interest coverage is 6.4 years (chart 8). This points to decent ratios recently - at least on average. 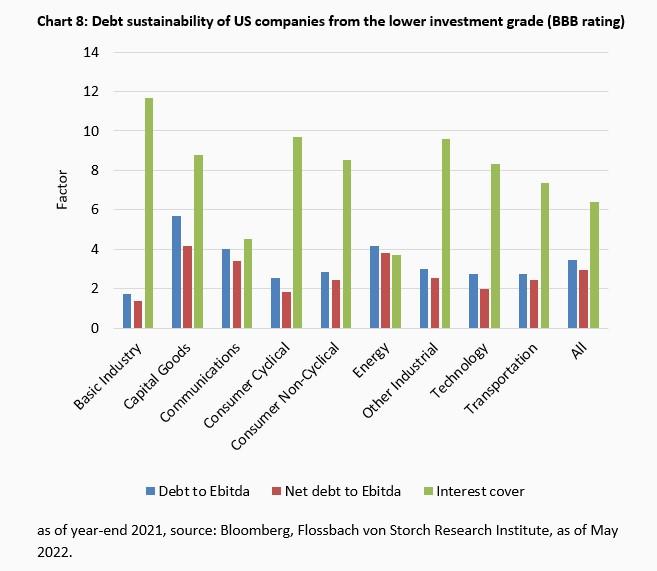 Unsurprisingly, the ratios are weaker for debtors whose rating has junk status. On average, however, even high-interest debtors are not overburdened, measured in terms of their debt to operating profits before asset devaluations. Interest coverage, however, is quite meagre, averaging 3.5 years (chart 9). 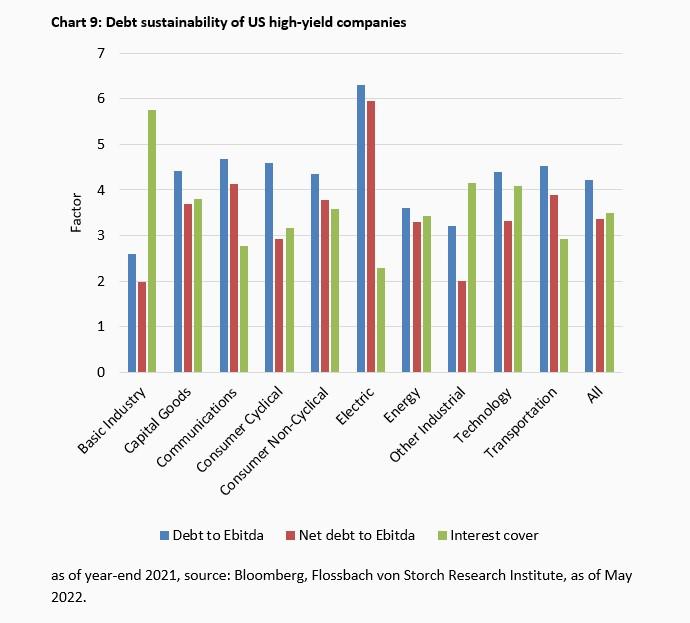 In terms of the total equity market, as measured by the FTSE US Total Market Index, which represents over 99 percent of total US market capitalisation, it can be seen that listed companies have significantly improved their debt-to-operating-earnings ratio before asset write-downs in recent years.

Measured in terms of net debt to Ebitda, they are significantly stronger than eight years ago: With a factor of just over 1.4, companies are relatively low in debt on average (chart 10). 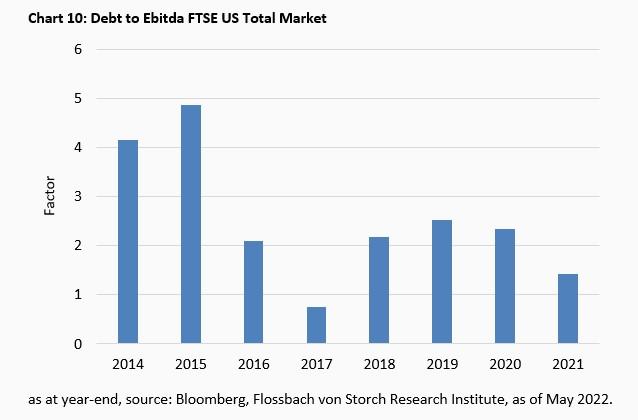 In contrast, the ratios of debt to equity and to total assets have remained almost constant in recent years. The share of debt in the company value has fallen - an expression of the significantly higher share prices (Chart 11). Thus, the significantly better profit situation alone suggests that debt is well sustainable on average. 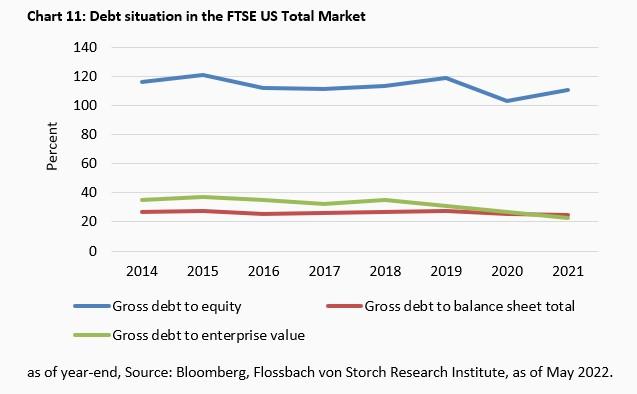 However, the vulnerability of the stock market to higher interest rates and, ceteris paribus, lower corporate profits is also reflected in the current valuation. The FTSE US Total Market is currently paid around 24 times current annual earnings and almost 22 times earnings before interest and taxes on the value of the company. Investors receive a 1.5 percent dividend and pay a 250 percent premium on book values (chart 12). 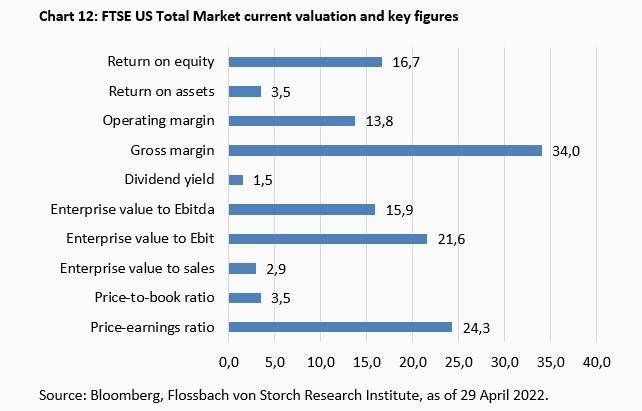 The FTSE US Total Market's current net income yield of a good four percent competes with the achievable real yields on the bond market, as does the yield from free cash inflows. Here, the yield in 2021 was most recently just under 3.2 percent, an eight-year low (chart 13). 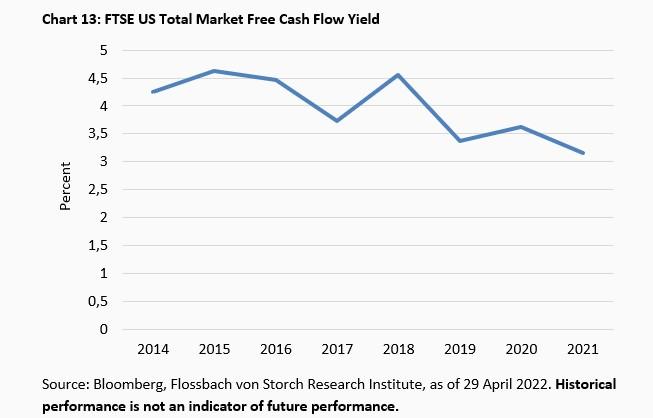 Although the debt of US companies has increased six-fold since 1986, it cannot be said that the burden is too high on average. Although the higher refinancing costs are likely to noticeably worsen key ratios and leverage factors, the US corporate sector as a whole should be a long way from a debt crisis.

Only a combination of a further significant rise in refinancing costs and weak cash flow could put many companies and the US corporate bond sector as a whole under pressure. Attention should be paid both to individual sectors with already below-average ratios and to the high-yield sector as a whole, which now plays a significant role.

The stock market should be affected, as it has been recently, by the mixture of higher corporate refinancing costs and higher discount factors for corporate values. Higher interest rates weaken operating profits and cash flows. Corporate values are lower with higher discount rates and higher risk premiums. Unless companies are able to generate higher than expected cash inflows by widening their margins. In the current global economic environment, this is likely to be a rather difficult undertaking on average.

The Federal Reserve certainly has leeway to raise interest rates without severely jeopardising the credit ratings of US companies. However, its leeway is limited. Key interest rates that are in the range of current inflation are likely to increase the financing costs of individual industries and the high-yield sector as a whole to such an extent that significant defaults would have to be expected - which regularly radiates negatively onto the stock market.

The higher interest rates are already ‘poison’ for the stock market, as can be seen from the sometimes extremely low prices of numerous technology companies and the collapsed stock market prices of companies with start-up character. This is also shown by the sensitive reactions to the partly weaker-than-expected results of established players from the top ten most heavily capitalised companies on the stock market.

The stock market is currently pricing in current expectations regarding the Fed funds rate and future long-term interest rate levels. If the upward trend is higher than recently expected or secretly hoped for, this is likely to lead to further price declines. In addition, interest-bearing securities are becoming more attractive in relative terms.

It should also not be forgotten that listed companies themselves are a very important demand group for their shares. In 2021, US companies bought back their own shares for a record $881.7 billion - partly on credit. These records could be a thing of the past if interest rates remain permanently higher and dampen demand for shares.

If the Fed were to take all these factors into account, as well as the record levels of corporate debt in absolute terms, then unlike in the last period of high inflation in the 1970s and 1980s, Fed funds above consumer price inflation rates would be virtually impossible.

Emerging markets and the Fed: what will matter for the next "tapering"?

In the event of renewed capital outflows, developing and emerging economies with robust political structures will best weather a new taper tantrum.

At the Institute since 2022. The graduate in business administration (FH), previously worked as a journalist and deputy head of "Money" at WirtschaftsWoche. The trained banker and book author ("Die Bilanztrickser") taught balance sheet research part-time at the private university BiTS in Iserlohn.

All articles by Christof Schürmann

How much rate hikes can US businesses take, Mr Powell? (PDF)