Real Economy Outlook: the path ahead

After a historical collapse of real economic activity around the world in the first half of 2020, future economic prospects remain uncertain as the third quarter of the year comes to an end. With constantly increasing new infections of the coronavirus worldwide, a second wave taking place in western Europe and some states of the US and the lack of a clear prospect of a vaccine, some governments are becoming increasingly active in (again) restricting public life to tame the spread of the virus. It is unclear how and to which extent the economic recovery in the last quarter of 2020 will continue and how dark or light the prospects for 2021 are. In this short comment I argue that in terms of economic growth China and the US have the better prospects and that the Eurozone is likely to lag behind.

The most recent economic growth forecasts for 2020 and 2021 show increased optimism compared to the forecasts published in June. As Figure 1 shows, the OECD’s forecast of World GDP for 2020 in June was almost -6% and it was updated to -4,5% in September. The updates have been mainly due to stronger than expected rebounds in economic activity especially in China, the US and some parts of Europe. The outlook improved especially for China and the US and worsened for India and South Africa (Figure 2). The upgrade of the forecast for 2021, however, takes back the upward revision of the 2020 forecast for the Euro Area countries. There are not very clear signals to assess economic activity in 2021. 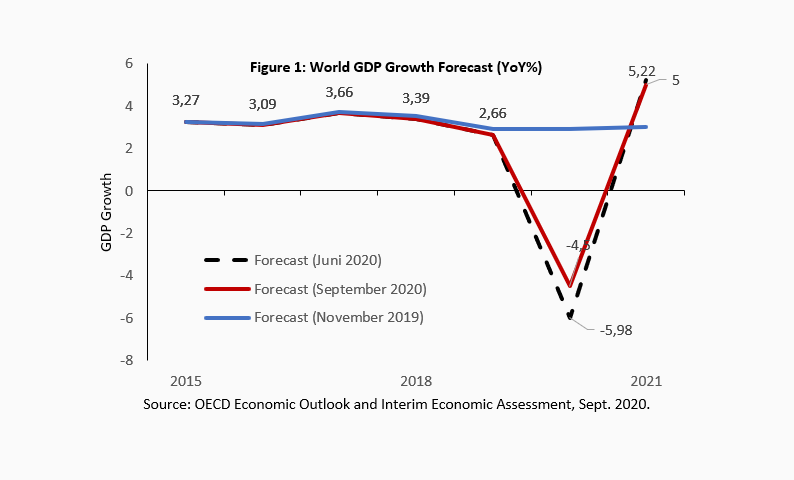 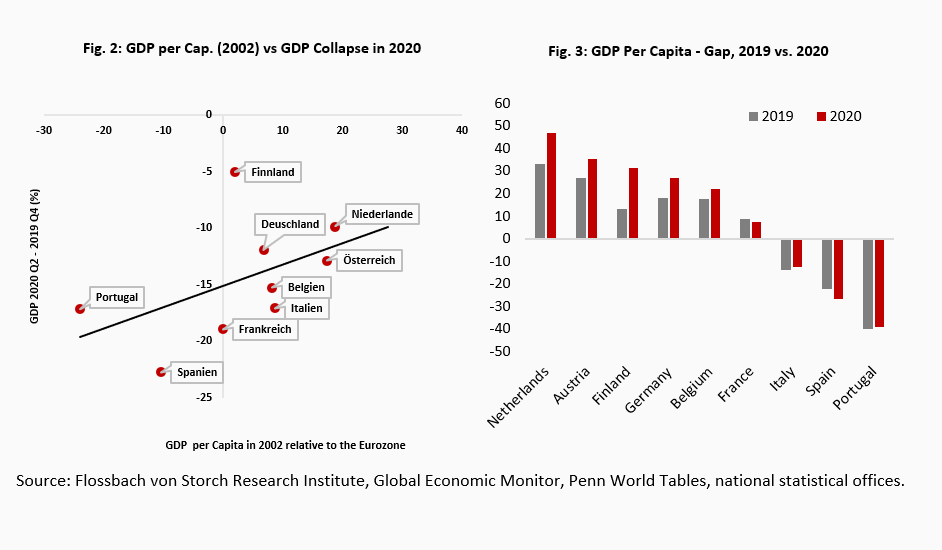 The economic signals regarding the final weeks of the third quarter point towards a strong recovery in China and losing momentum in the US and western Europe. As opposed to the Eurozone and the US, production in China has had a stronger contribution to economic recovery than local consumption. In July, industrial production in the Eurozone and the US was -7,8% below previous year’s level. In China, in contrast, industrial production has been growing since April and official statistics for August show a 5.6% growth (YoY%). The retail sales for the US and the Eurozone show a strong improvement until July compared to last year. In China, on the other hand, August was the first month with growth in retail sales. 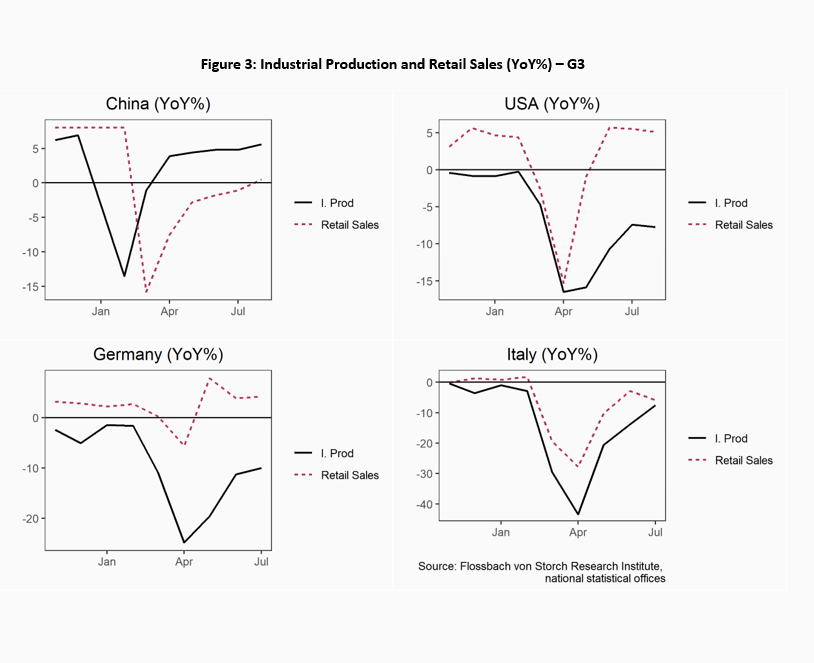 The Purchasing Manager Indices for August showed a slight slowdown in the pace of recovery especially for the Eurozone. The Flash estimates for September show that the US, Germany and especially France and the Eurozone as a whole fell short the August level (Figure 4).

The further spread of the virus has increased pressure on governments to act with restrictions and has added uncertainty to the economic recovery especially in the Eurozone. A second wave is developing with France and Spain as new hotspots in western Europe with daily confirmed new cases clearly above the peak numbers registered in April. The number of cases in Germany and Italy have increased as well, but not as fast. The number of deaths has not increased as much as the number of new cases, but they might rebound in the near future. China (red line), in contrast, has not seen a resurgence of infections after the peak in February. In the US (Figure 6) new cases have started to increase recently in different states after a national all-time peak was registered in Mid-July.

The resurgence of cases has slowed down the recovery in travel and mobility. Despite the very slow recovery of air traffic, the number of flights has remained low in the US, and has even fallen since July in Germany. The google queries for flights do not predict a rebound soon. In China the number of domestic passenger trips as well as the internet queries via the search engine Baidu remain roughly at the level of July (Figure 7). The weekly new jobless claims in the US is not decreasing as fast as politicians would like. Commentators warn of an insolvency wave which could start in the fourth quarter of 2020 not only in the US but also in the Eurozone. Finally, our real economy tracker which collects a broader number of high frequency indicators shows a slowdown in the pace of recovery for Germany and the US (Figure 8). 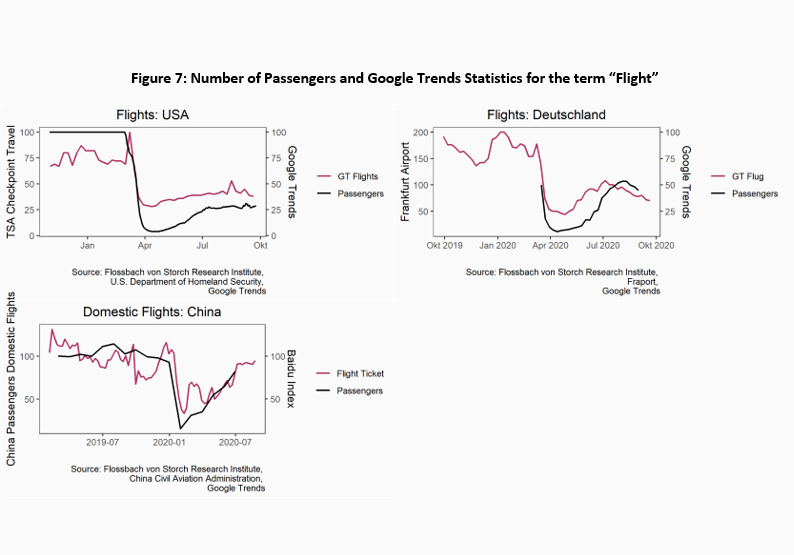 The path ahead will be marked by the three different types of crisis management evidenced during the last months. First, the Chinese “model” has been successful in containing the virus and engineering an economic rebound. Apart from strong lockdowns during the first wave, the Chinese strategy has relied on invasive tracking and surveillance tools to contain the spread of the virus. The strategy has been successful so far and together with fiscal and monetary stimulus Chinese production has rebounded. Even with the uncertainty of the economic recovery of China’s most important trade partners, i.e. the US, the control of the spread of the coronavirus is likely to allow for the strongest recovery in terms of GDP growth in 2020 and 2021.

Second, the US American model has not successfully contained the spread of the virus but economic recovery is still likely to continue. Despite the high number of infections and the continuous spread of the virus across different states, a higher level of tolerance for infections and deaths allow for less restrictions on mobility, travel and public life and therefore a faster recovery as in the Eurozone. Moreover, the massive monetary and fiscal stimuli have fueled economic activity despite the unprecedented high unemployment numbers. The second peak in infections in mid-July did not cause another economic collapse as in April.  Especially after the US presidential election more certainty on the near future could further improve the economic outlook.

Third, the Eurozone’s diverging paths in controlling the pandemic and economic growth slow down the recovery. As shown in Figure 5, the effectiveness in controlling the pandemic has been very different across the Eurozone countries. While France and Spain are experiencing a second wave with higher numbers of infections than the ones registered during the first wave, Germany and Italy have been better able to control a second resurgence of the virus. In general, however, the tolerance of infections and deaths due to the virus is much lower than in the US and the level of tolerance for state surveillance is much lower than in the US and China. This makes restrictions more likely, increases uncertainty and slows down economic recovery.

Taking into account the effectivity in containing the spread of the virus until now, the tolerance of increasing numbers of infections and the speed of recovery until now, China and the US have a brighter outlook in terms of GDP growth for 2021 than the Eurozone. With a rebound of the US economy, international trade can also recover which would benefit China and the US most. With heterogenous paths and differences in the effectivity to control the spread of the virus, the Eurozone is more likely to further increase restrictions and see a slower recovery in 2021. A potential further increase in the number of cases during the fall and winter in the northern hemisphere, concrete prospects of the availability of an effective vaccine and the results of the US presidential elections will give us more information to assess economic activity in 2020 Q4 and in 2021.

Are we there yet? Tracking Economic Recovery in Germany

Our new real econony index shows that the German economy started a slight recovery by the second week of June.